I Return to Zürich, 11 Years Later


There's something special about returning to a place that you visited long ago. Looking across a bridge and seeing Grossmünster, that massive stone church on a hill with two hulking towers. Seeing the white and blue striped storefronts that unexpectedly trigger a memory of exploring Zürich with mom and Carra while dad was in meetings, walking and re-walking the same route until we felt we could call it our own. Sipping hot chocolate in the city where I learned my first two words of German: heisse Schockolade, and even listening to a music box that belonged to a toy museum curator's grandfather, not far (at least in distance) from the store where I first excitedly viewed the internal workings of a music box. 11 years ago, in a time before data and Google Maps, Zürich became crystalized in my memory as the first European city I'd ever visited, and that experience remained unrivaled in my impressions of Europe until I set foot in Budapest this past January.

Of course, there's a new dimension of appreciation that comes from viewing a place from a second, different context. Perhaps the biggest change is that after three years of taking German with Herr Stark and Frau Michalak at IMSA, signs that used to display unintelligible jumbles of letters now leave in my mind at least some hint as to their meaning. The bridge I once recalled as spanning the wide Lake Zürich seems shorter to me now, taking less than a minute to cross, and just 20 seconds to jog. And this time around, in my one full day in Zürich, I feel that I've visited, seen, and understood far more than I did in the two weeks I spent in Switzerland when I was in 3rd grade.


After passing out for 11 hours (it's what happens after a hackathon) at a Jungendherberge, a wonderful youth hostel just south of Zürich's city center, Harrison and I rose bright and early to hop on a tram to downtown Zürich. For the student discount of 2 CHF (which is about 2 USD), we climbed to the top of one of Grossmünster's two towers to behold a panoramic view of the entire city. 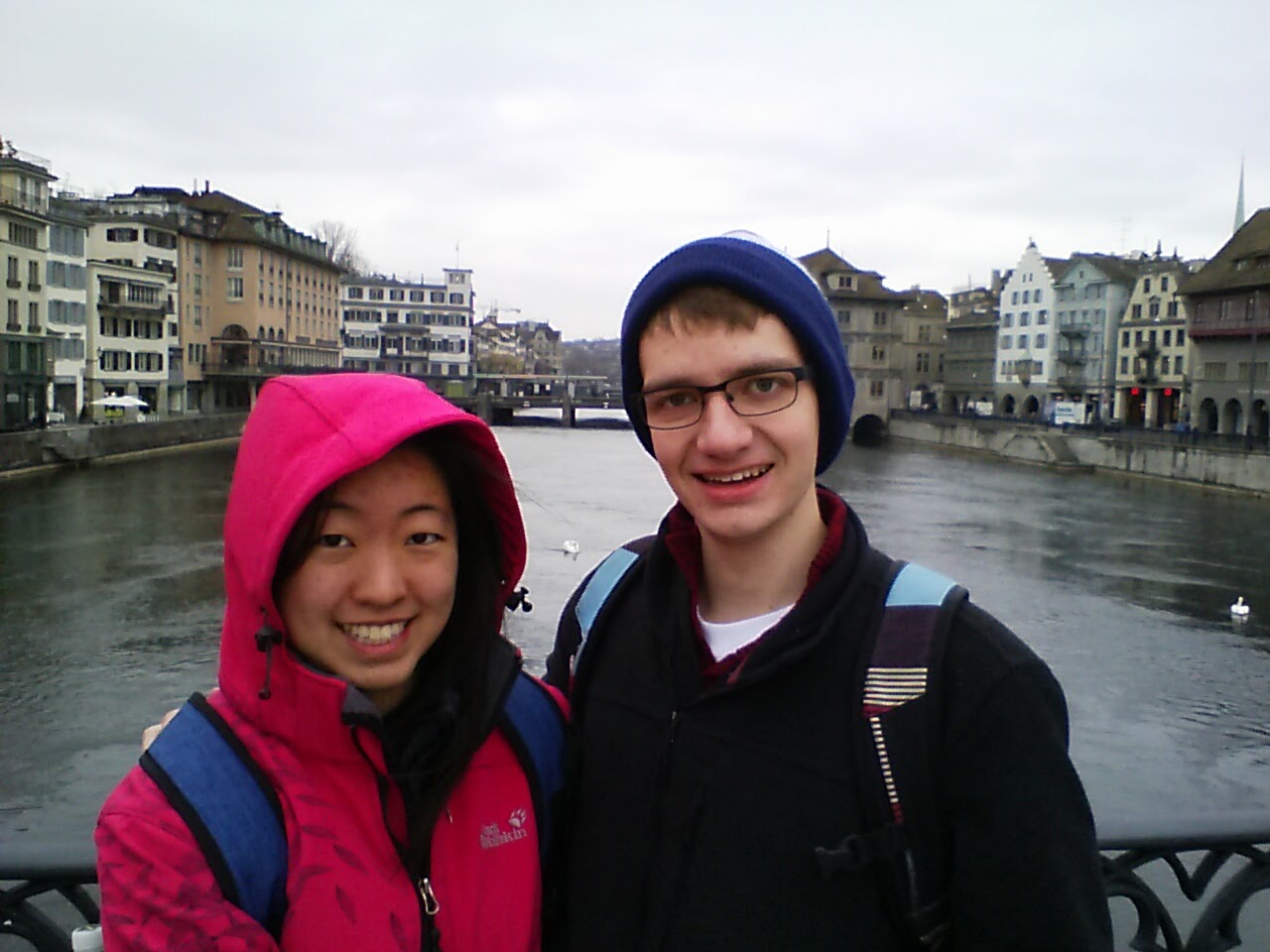 Harrison and I on a bridge over Lake Zürich 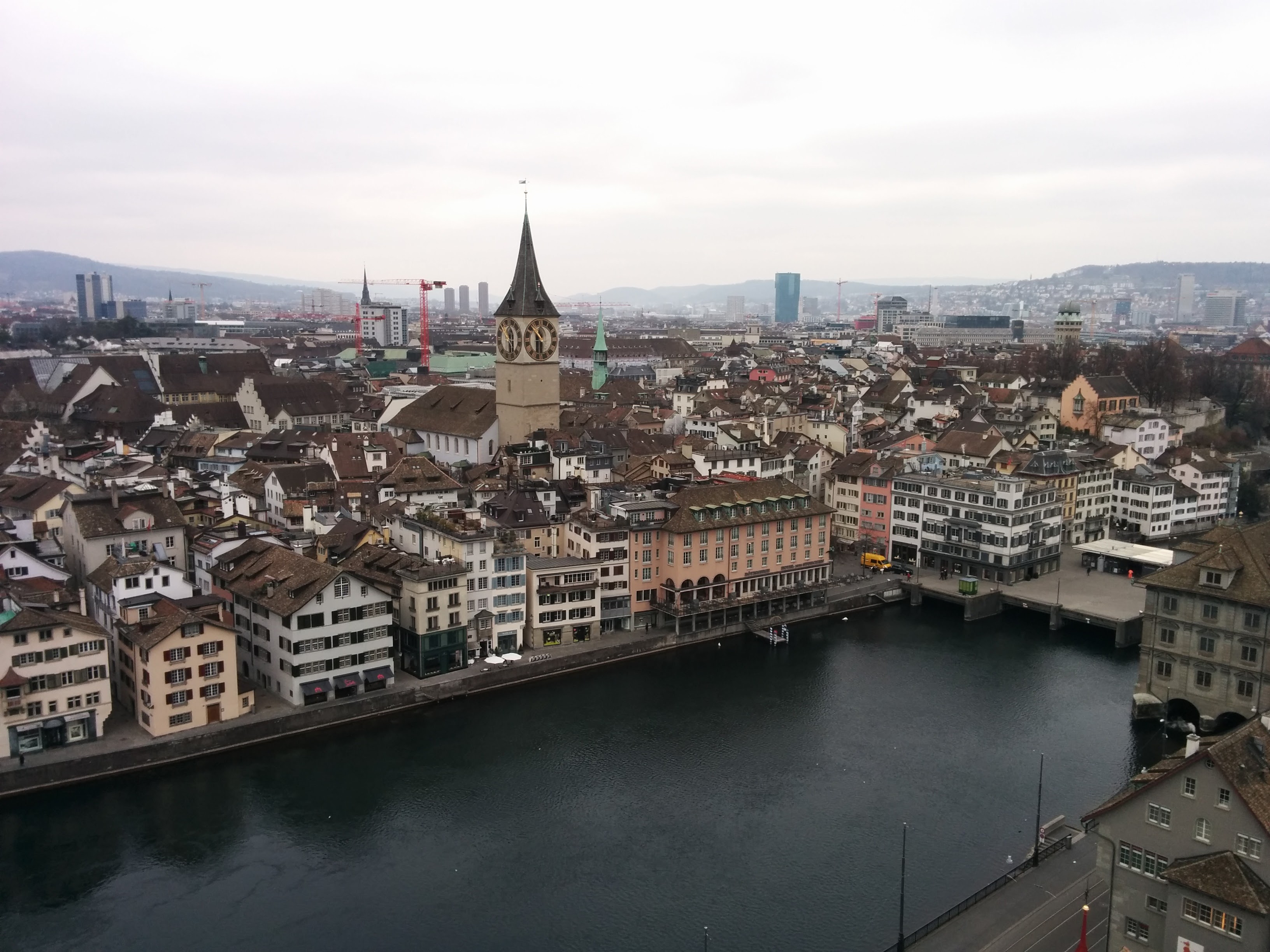 View from atop Grossmünster. The black and gold clockface on the tower in the middle is the largest clockface in all of Europe!

At 11 am, we joined a free walking tour at Paradeplatz, one of the main tram nodepoints as well as one of the most expensive pieces of real estate in the city (since it houses the headquarters of both UBS and Credit Suisse). Just two stops in at Fraumünster, the former women's monastery across from Grossmünster, we ran into Mei Lin, who we met in St. Gallen at START Hack over the weekend! 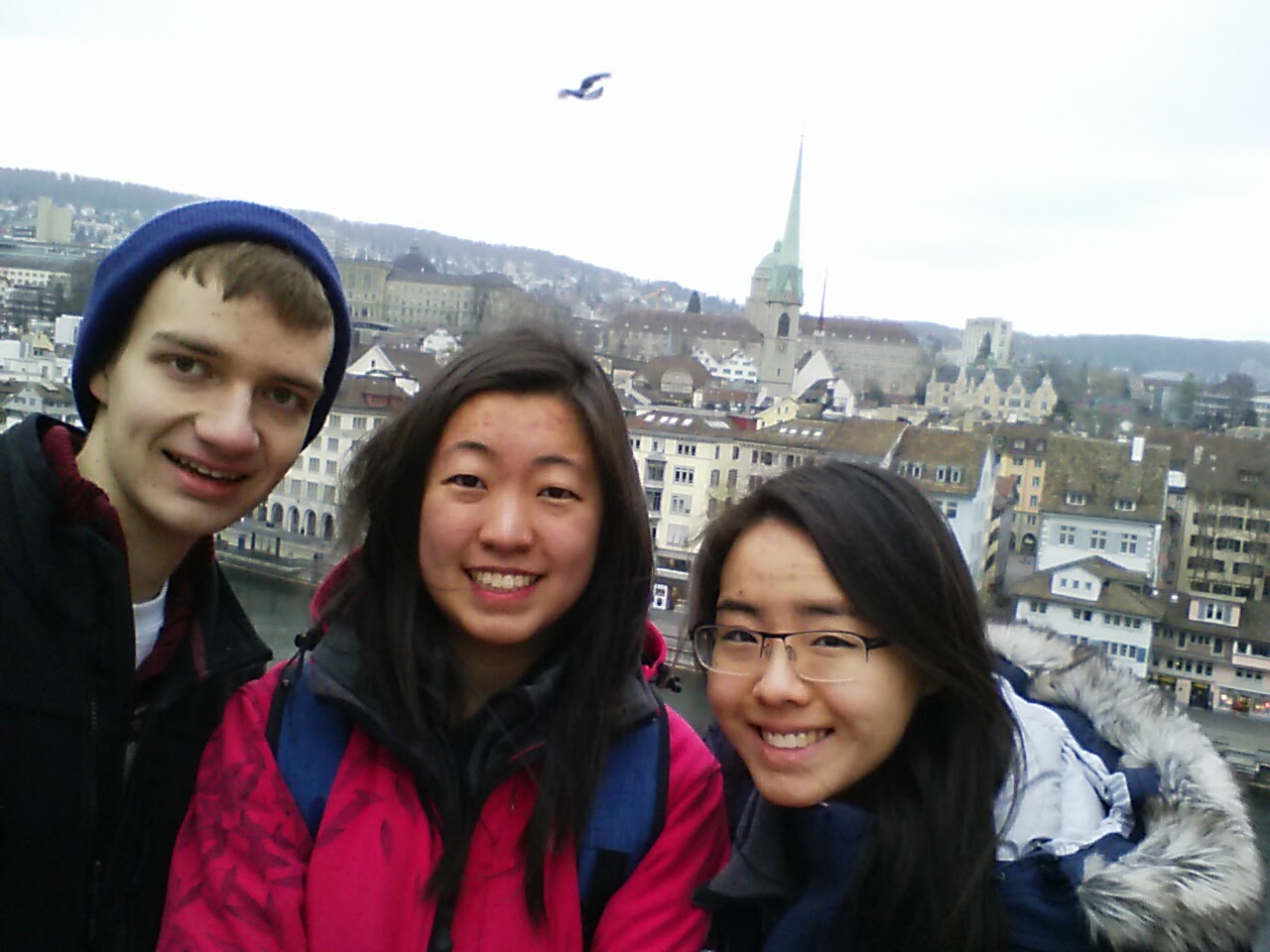 Harrison, Mei Lin, and I atop Lindenhof 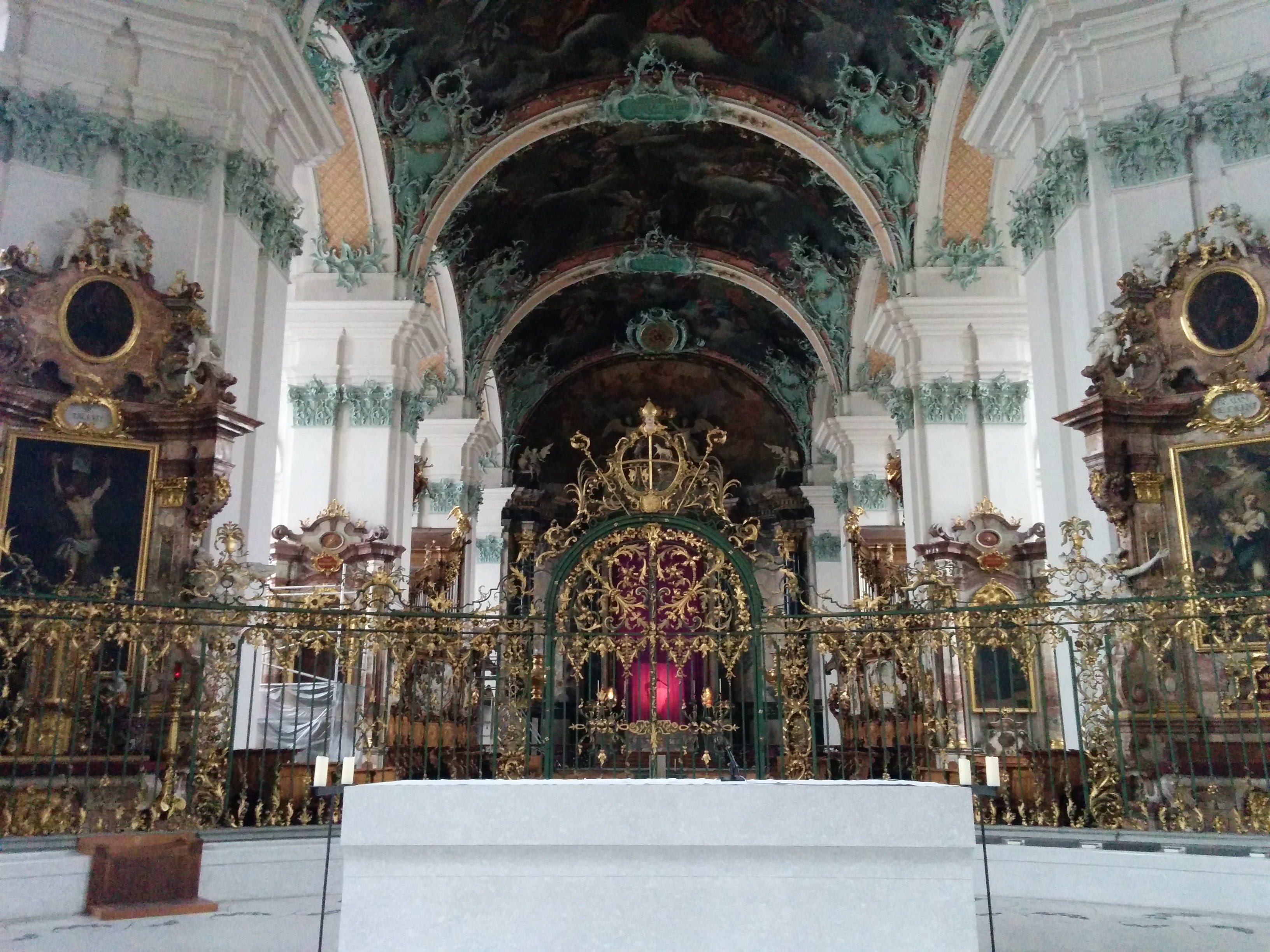 Inside of the Abbey of St. Gall, a UNESCO World Heritage Site 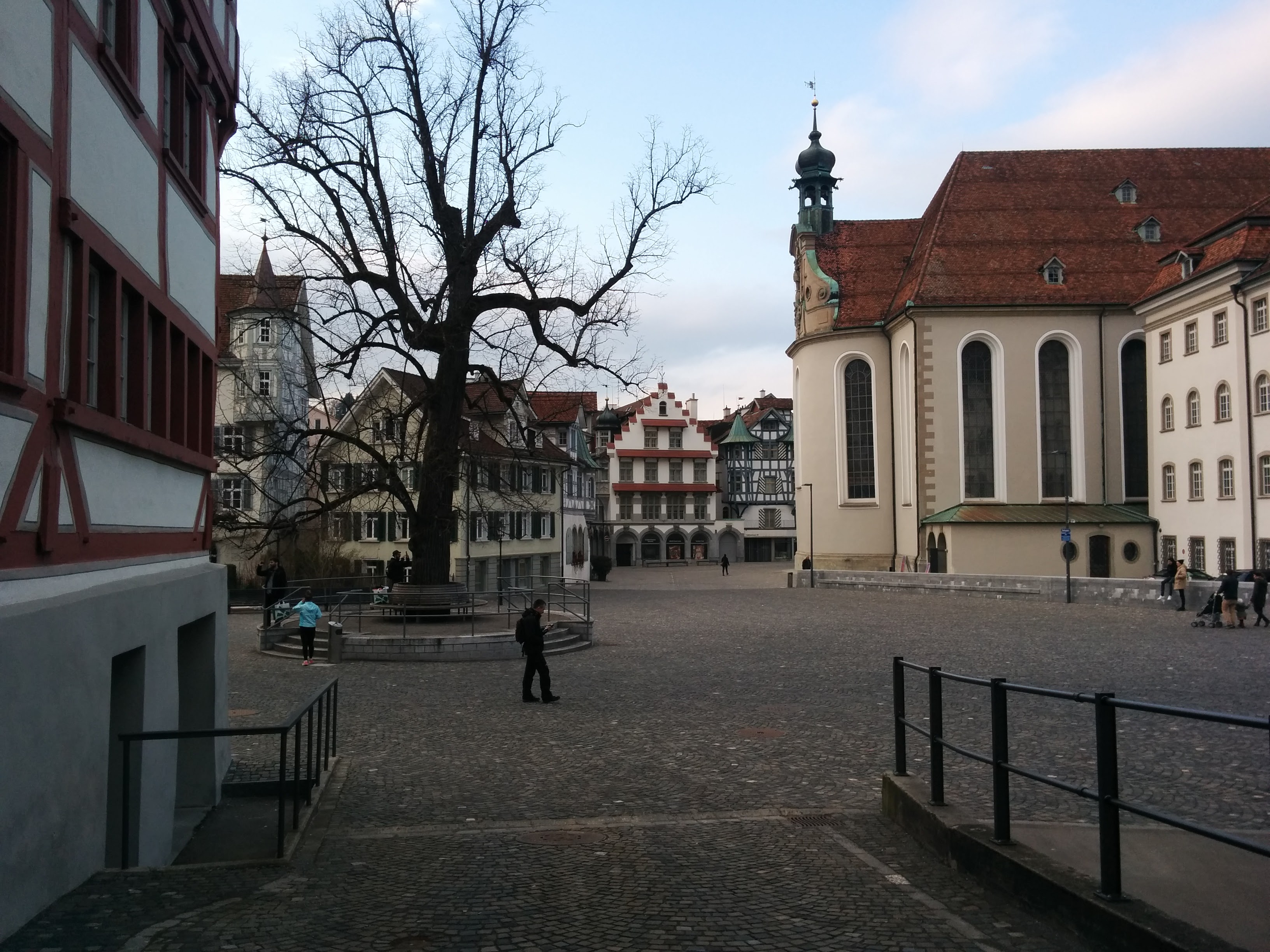 Did you know that the (relatively) small city Zürich has over 1,200 fountains, all of them drinkable? With such a high water fountain density, you don't even need to carry around a water bottle! I personally drank out of two- both had water that was nice and cool and tasted like water. 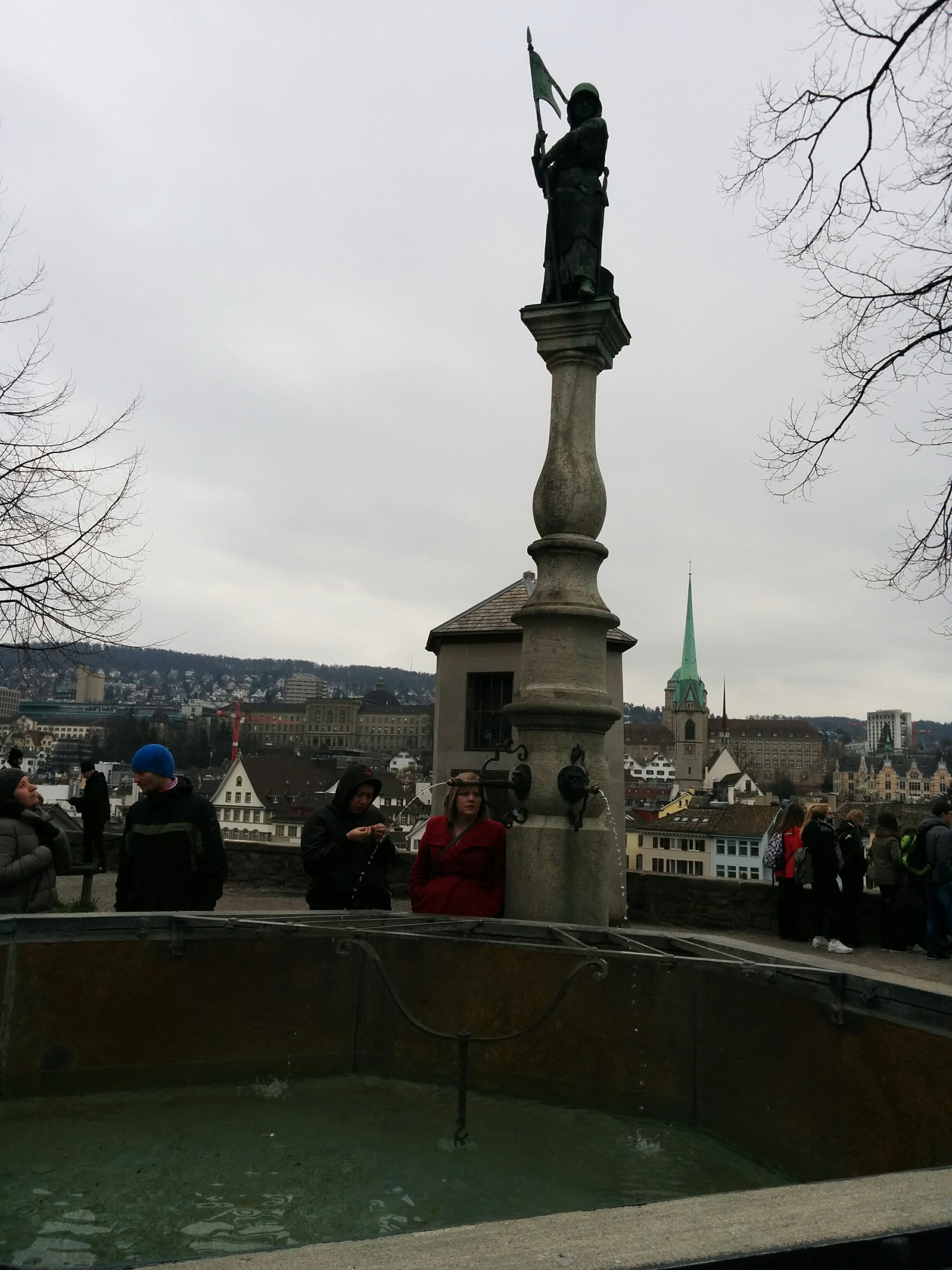 Legend has it that in 1291, the women of Zürich saved the city from a Habsburg invasion by dressing up in military garb, gathering atop the Lindenhof, and making such a clamor that the oncoming Habsburgs were convinced that another, stronger army had already overtaken Zürich. Intimidated, the Habsburgs immediately turned around and let Zürich be. The female warrior at the top of this fountain is supposed to be in honor of these women.

After warming up with a cup of hot chocolate post-walking tour, we embarked on a quest to find a healthy, affordable (read: under 20 CHF) place for lunch. After scanning several menus with 25 franc sandwiches and 45 franc steaks, we finally came across an incredible vegetarian restaurant Hiltl that operated on a "weigh and pay" system. 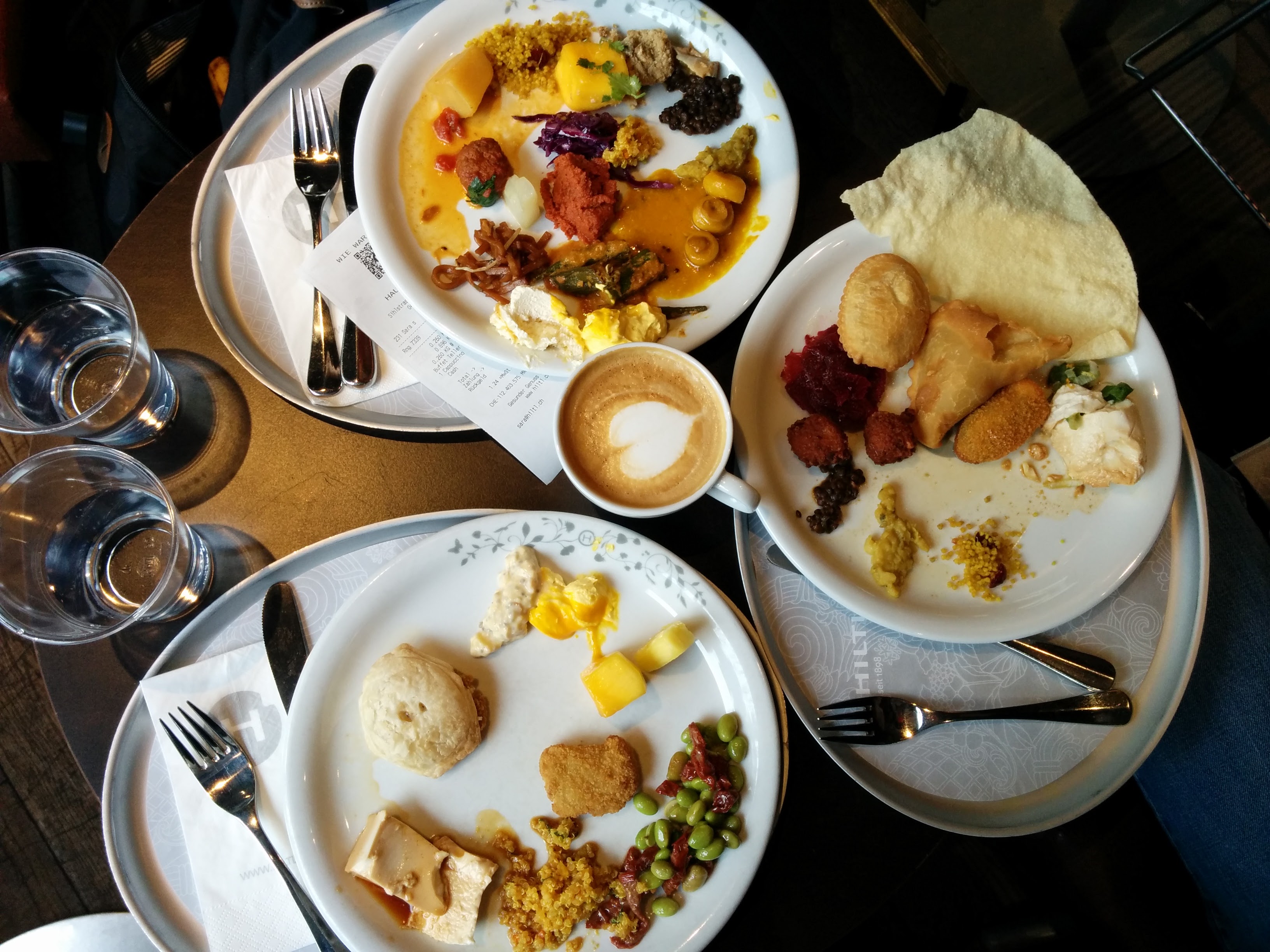 Going vegetarian for a post-hackathon cleanse

The afternoon was another flurry of activity: we went to the Zürich Toy Museum, ogled the brands along Bahnhofstrasse (the most expensive retail street in Europe), ate Luxemburgerli at Café Sprüngli, bought chocolate at Migros, took a train to the top of Uetliberg, and ended the day by watching a street fire performance. 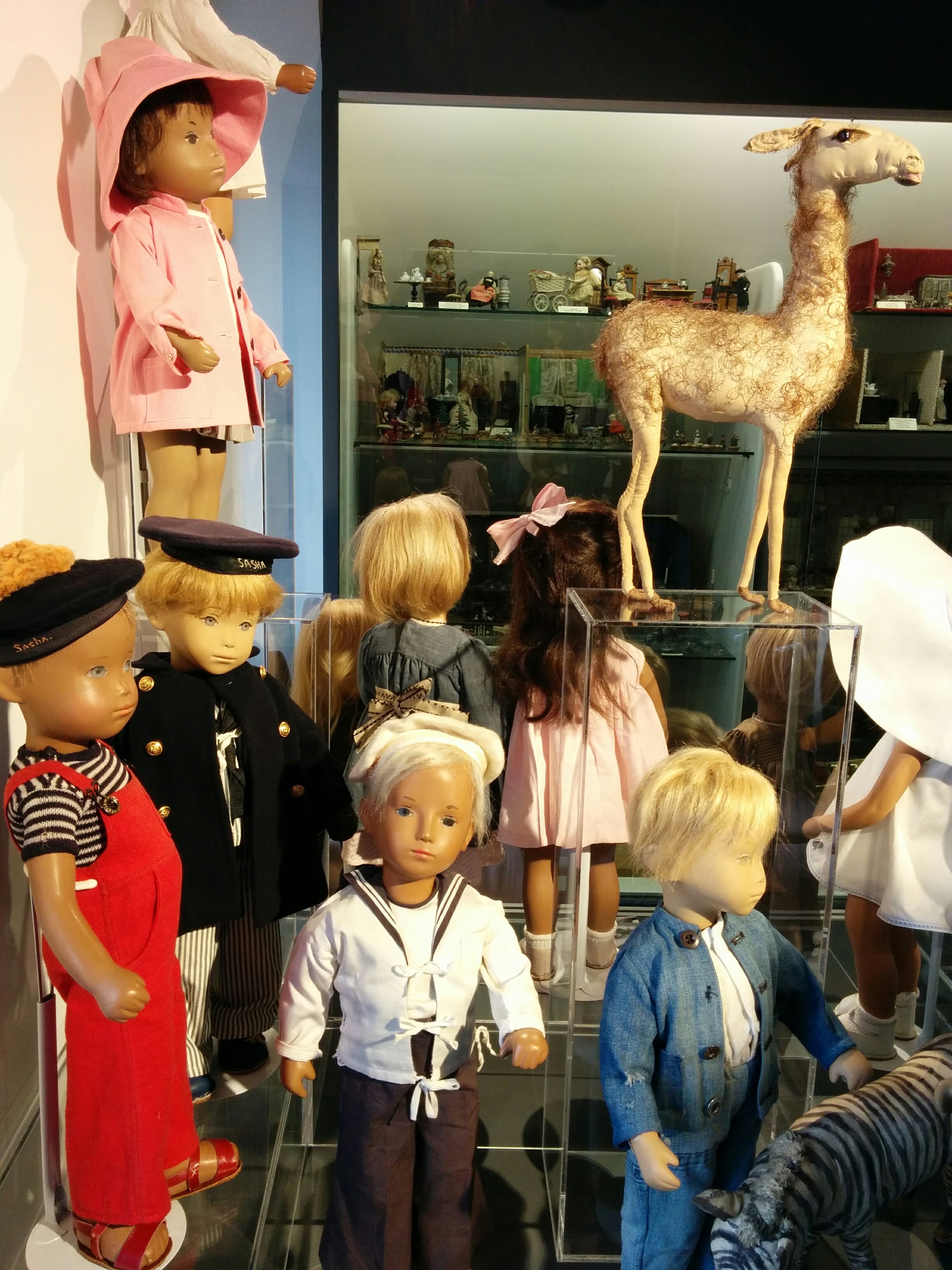 Each of these dolls is worth 8000 CHF 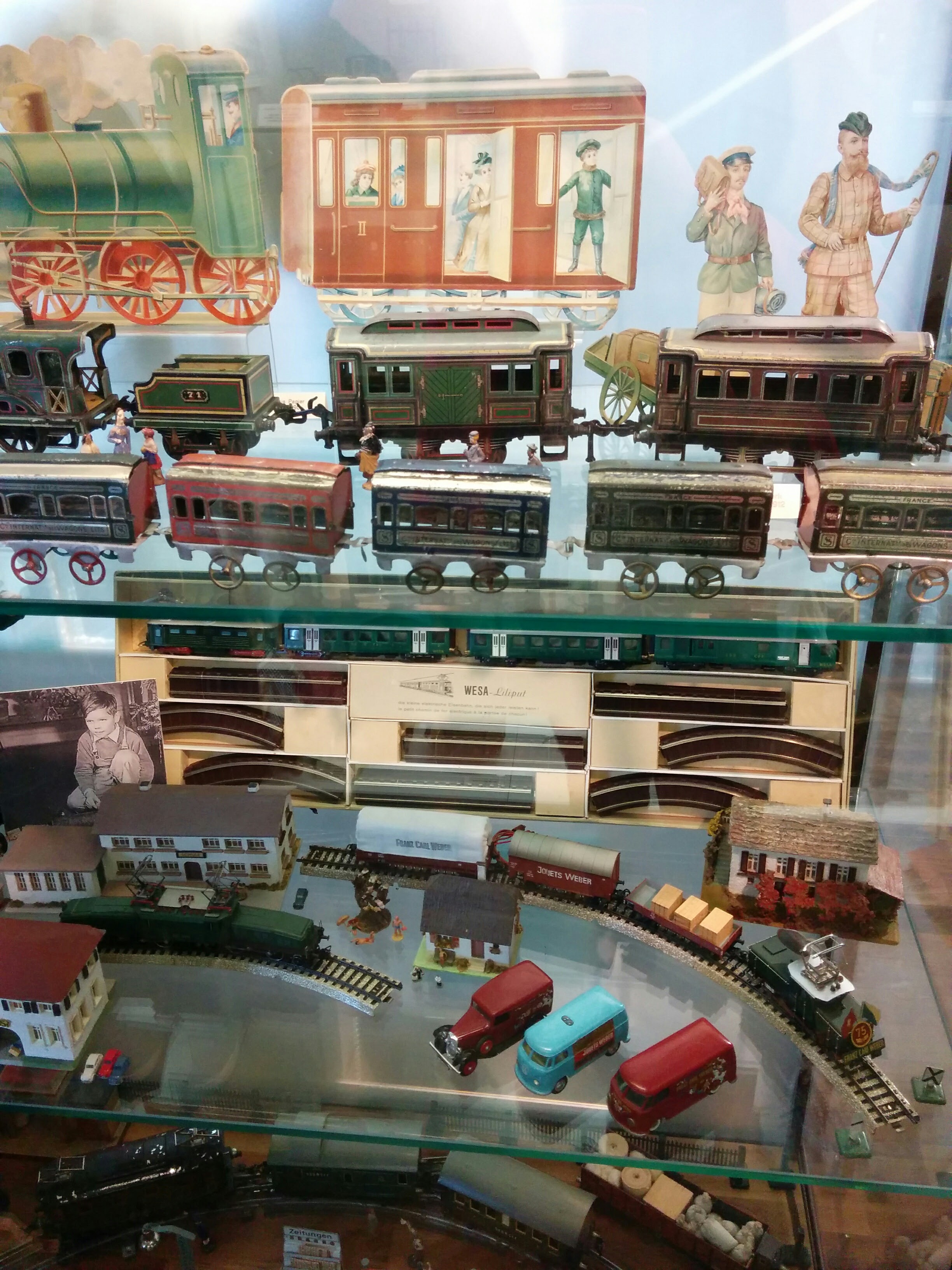 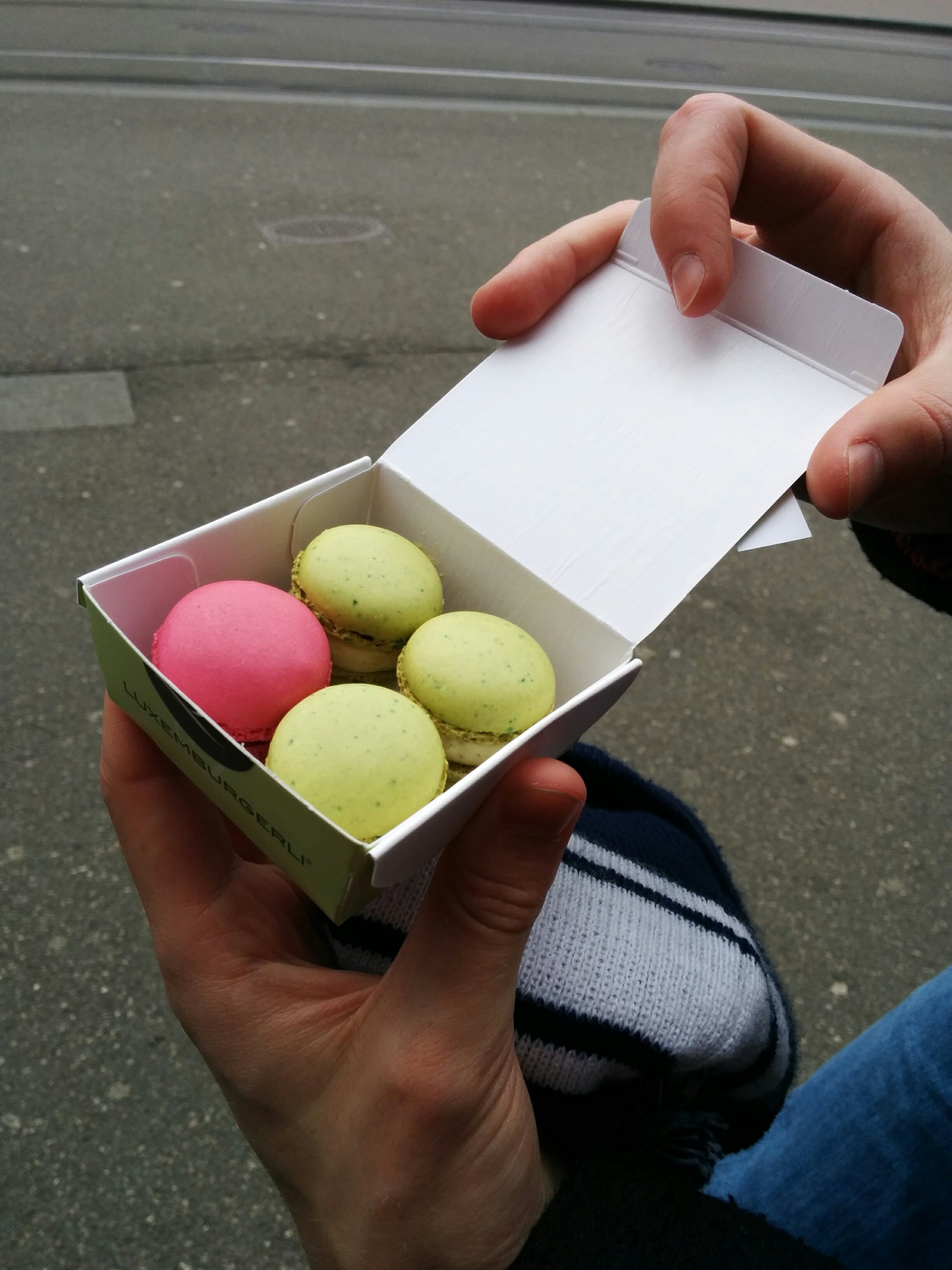 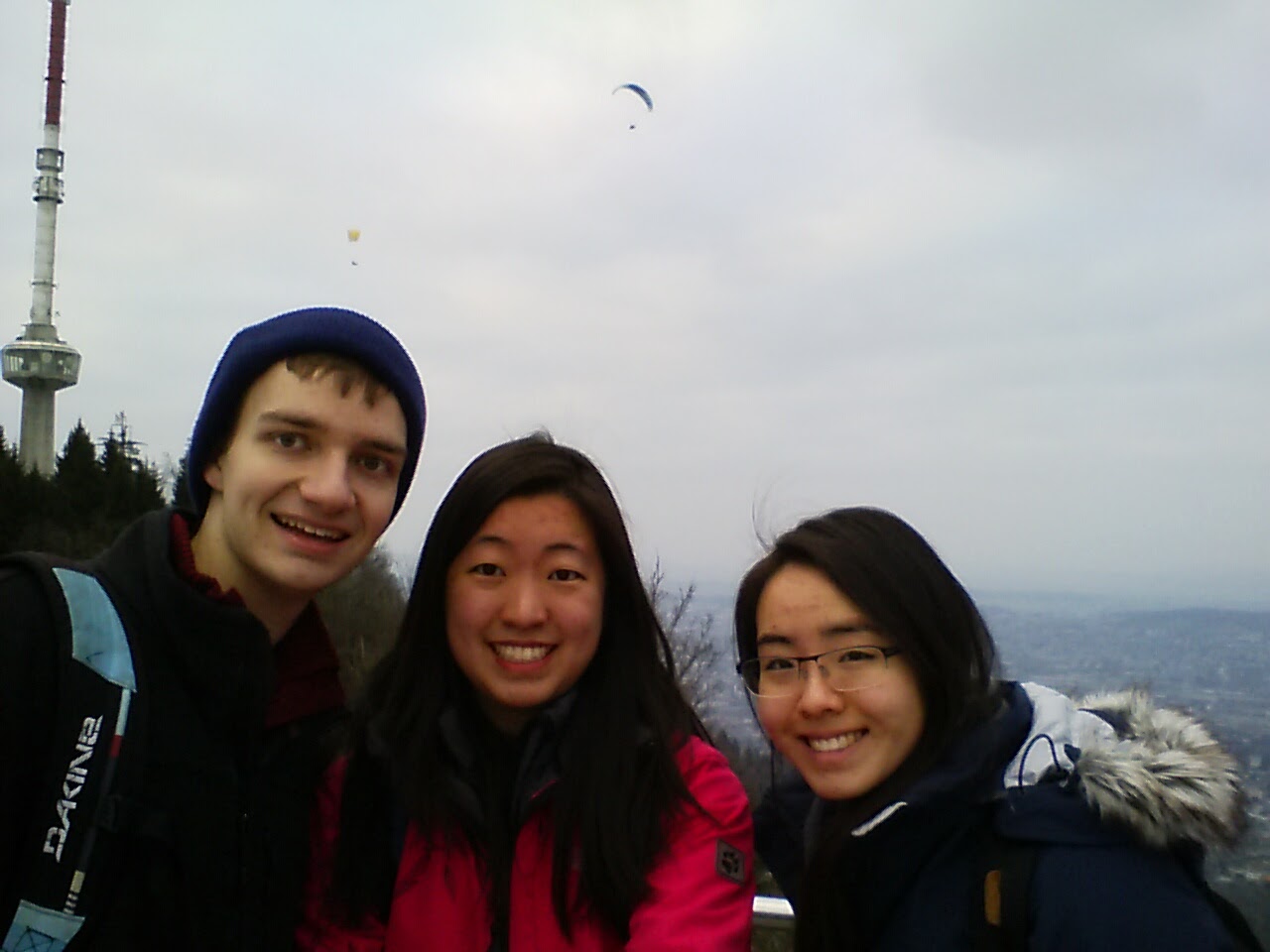 A selfie with paragliders atop Uetliberg, a mountain in Zürich

Interestingly enough, I wasn't asked for my passport once on the flight back from Zurich to Münich to Budapest… perhaps airport security is more lax when traveling within the Schengen zone? Then again, in America, everyone is required to show some form of identification, even when flying between states. Also, the Münich airport is officially my new favorite airport; while Singapore used to claim the title given its butterfly garden and free massages, nothing trumps books and free hot chocolate for me. #thankslufthansa 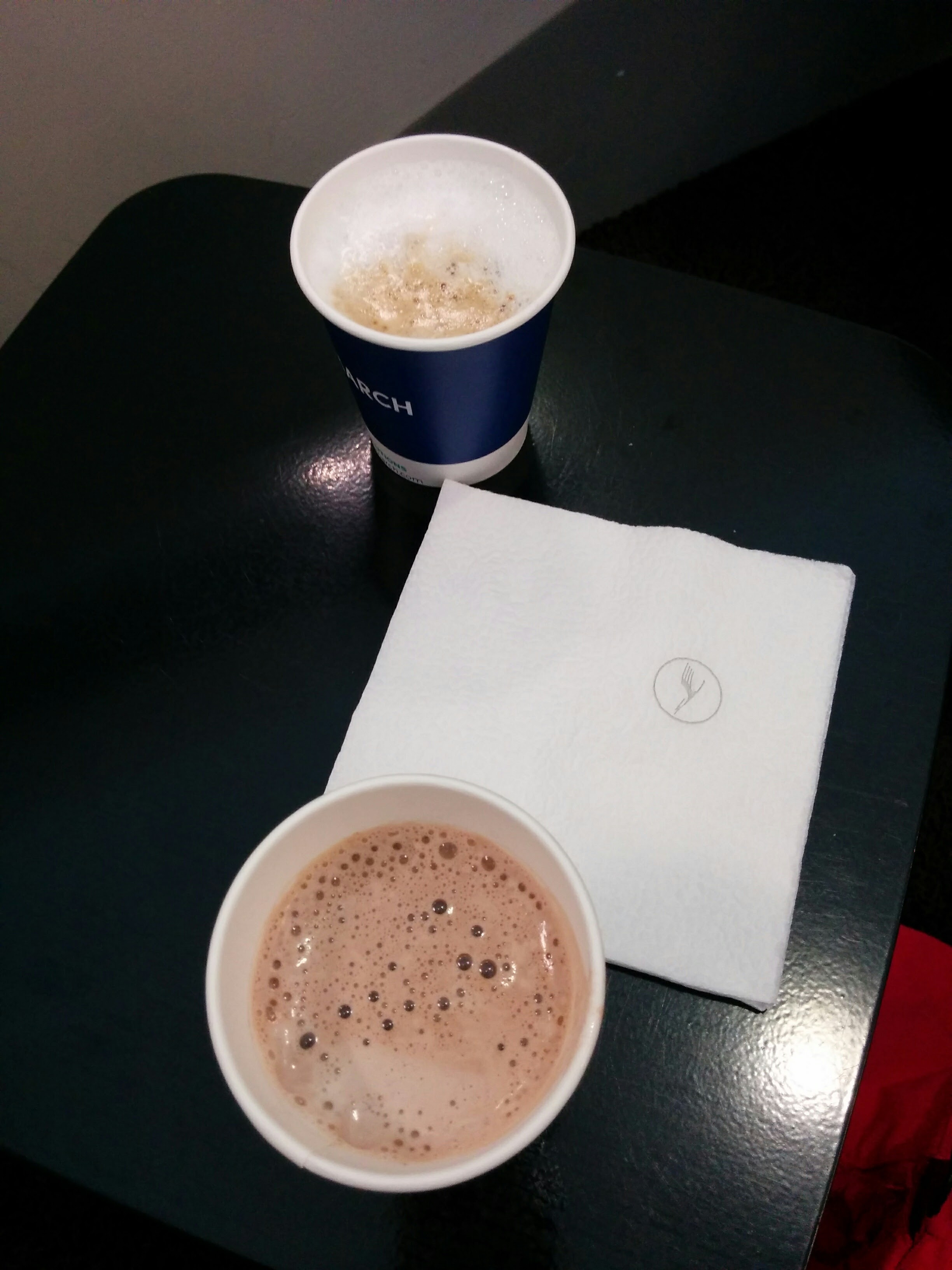 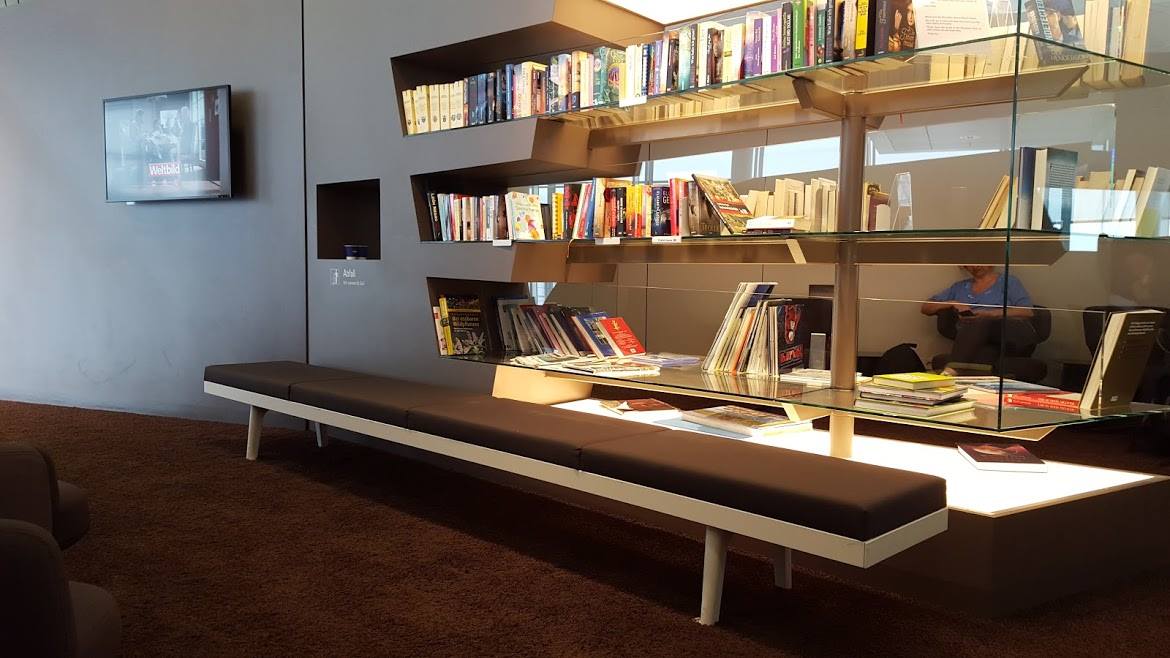 Books in several languages at the Münich airport