My Quest to Join a Hungarian Soccer Team


About a month into my semester in Budapest, I felt that something was amiss. It'd been two weeks since I'd been immersed in Hungarian at the Babilon Language school, and my schedule had started to become… mundane. I'll write more in depth about the AIT-Budapest program in a future post, but my point is, I was taking computer science courses in English, attending classes with (almost all) Americans, and living with Americans. Moreover, I spent most of my time indoors due to the frigid outdoor weather. Not what I was aiming for when I made plans to study abroad in Budapest.

So, needing exercise but not being the gym membership type, and seeking more local interaction but being unable to initiate more in depth conversation in Hungarian than basic greetings, I reached out to the AIT-Budapest program staff to see whether they knew of any local women's soccer teams that would be willing to take on an extra member for a few months. Unfortunately, that didn't work out, as the places they recommended ended up being a two hour commute away. However, a breakthrough came when I was talking to a friend who was thinking of joining Central European University's debate team.

"How far is CEU?"
"15 minutes, right by Deák Ferenc tér."
"Do you guys debate in English?"
"Yeah, CEU is actually mostly international students!"

I scrolled down the list of clubs on the CEU website, and bingo. Pickup soccer on Fridays from 7-9.

Fast forward a few weeks and you could say I've become a regular. 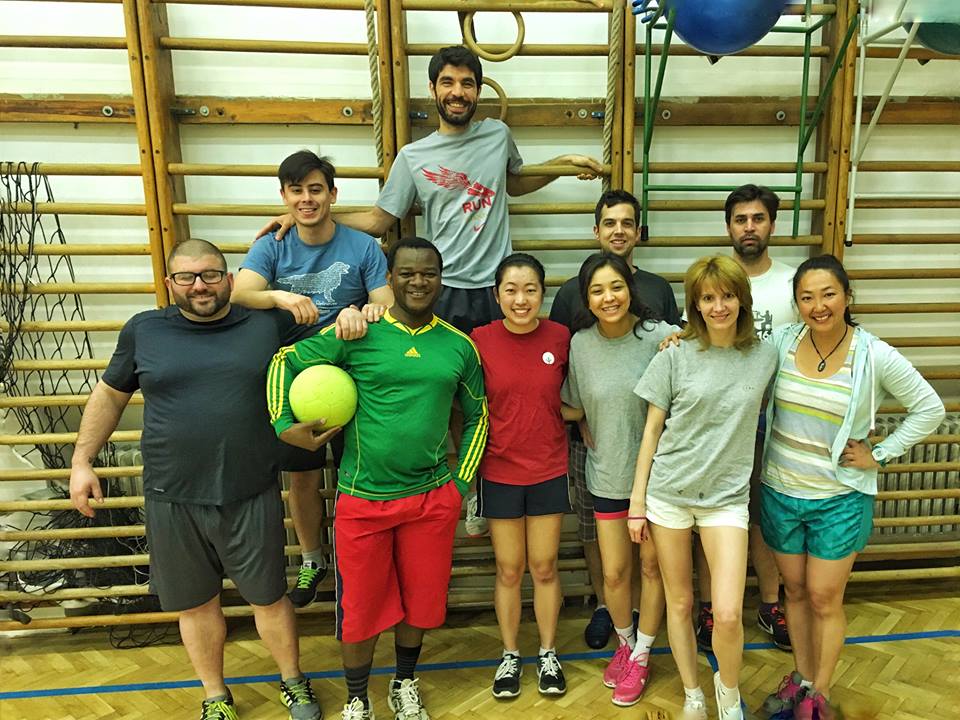 One evening, Ernest (wearing green) told us it'd be his last night playing soccer, since he was graduating and returning home to Africa. As a side note, Ernest is one of the most agile, fast-footed players out there, and I don't think I've ever been able to steal the ball from him. After pickup that night, we went to a local restaurant to send Ernest off with drinks. I ended up wedged between a Hungarian, a Costa Rican, another American, Ernest (a Tanzanian), and an Uzbek, all of whom were at different stages in their life (at least from me). Five minutes in, I learned that Ernest was actually a PhD- I should've been calling him Dr. Ernest this whole time! "No, no, no," he waved me off, "doctors save lives, I don't do that." The conversation ranged from the housing situation in large cities to the varying forms of discrimination against minorities in different countries, but the most interesting topic ended up being homosexuality.

Earlier that day, Ernest had attended a talk by a gay rights activist and was left unsettled. It turns out that in both Tanzania and Uzbekistan, being gay is a crime punishable by jail time.

"I'm a law abiding citizen. If it's against the law, people should follow it," proclaimed Ernest.
"What if you don't agree with the law?" challenged Meiko.
"To be fair," I interjected, "when I was being debriefed on studying abroad, I was told to make sure to read up on local laws before I travel, to avoid accidentally breaking any local laws…"

We talked about Nelson Mandela, the feasibility of fighting from jail... "Even the US ambassador wears a turban when he visits Iran!" exclaimed Ernest.

It made sense to me that the most reasonable way to go about protesting a policy is generally through lawful means. Whether the law should be changed soon became another area of contention.

"Obama is the devil we know. He comes to our country, ignores Boko Haram and every other human rights issue, and talks to us about gays as if that's the only human rights issue…. white man came to Africa and took our people as slaves, then brought us the Bible and told us that homosexuality is a sin. Now white man comes back into our country and tells us to change everything again?"

It seemed to me that Ernest's problem was less with homosexuality and more with the West continually exerting its will on his continent, despite the age of colonialism supposedly ending long ago.

Indeed, Ernest conceded, "I don't have anything against gays. I have something against the West constantly coming in and telling us what to do."

As I was sitting there, chatting… I couldn't help but think: thought-provoking conversations with people from around the world, this is why I came abroad. 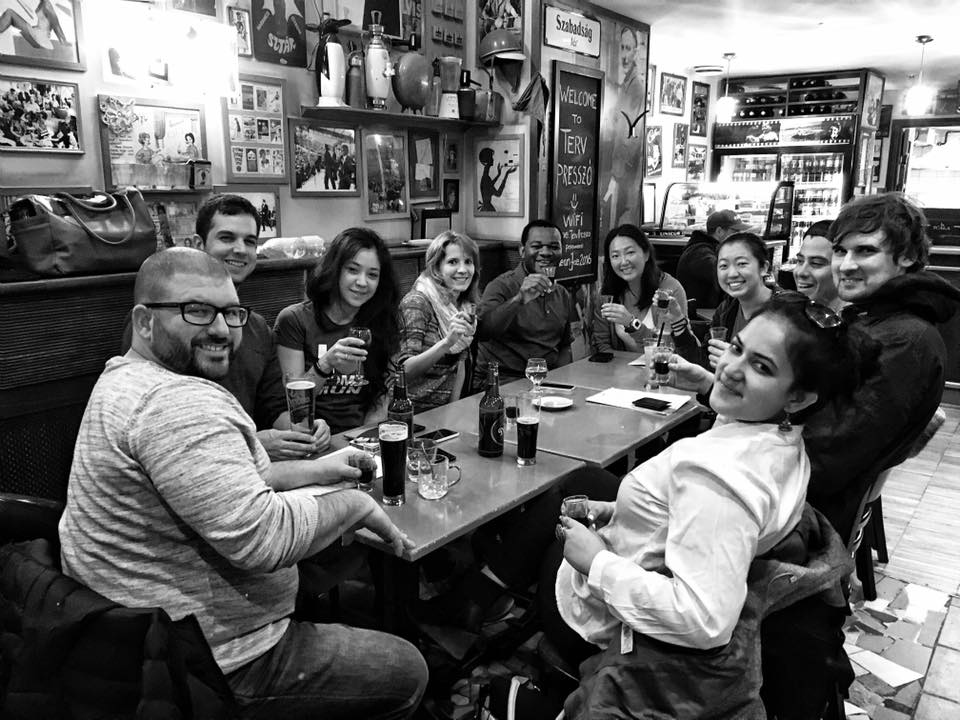 Sending off Ernest with shots of unicum

Another day, one of the organizers of CEU pickup invited me to check out a women's team practice on Margit Island. *Cue adding Monday and Wednesday practices from 6:30-8 to my weekly schedule.* Most of the women are Hungarian, so the coach usually gives directions in Hungarian, then one of my teammates translates them to English for the benefit of a Finnish teammate and me. It was as part of this team that I played in my first "cageball" tournament, a series of 12 minute 3 vs. 3 soccer matches that take place in a small "cage". If you move the marker to 1:07 in the video below, you'll see me score a goal! 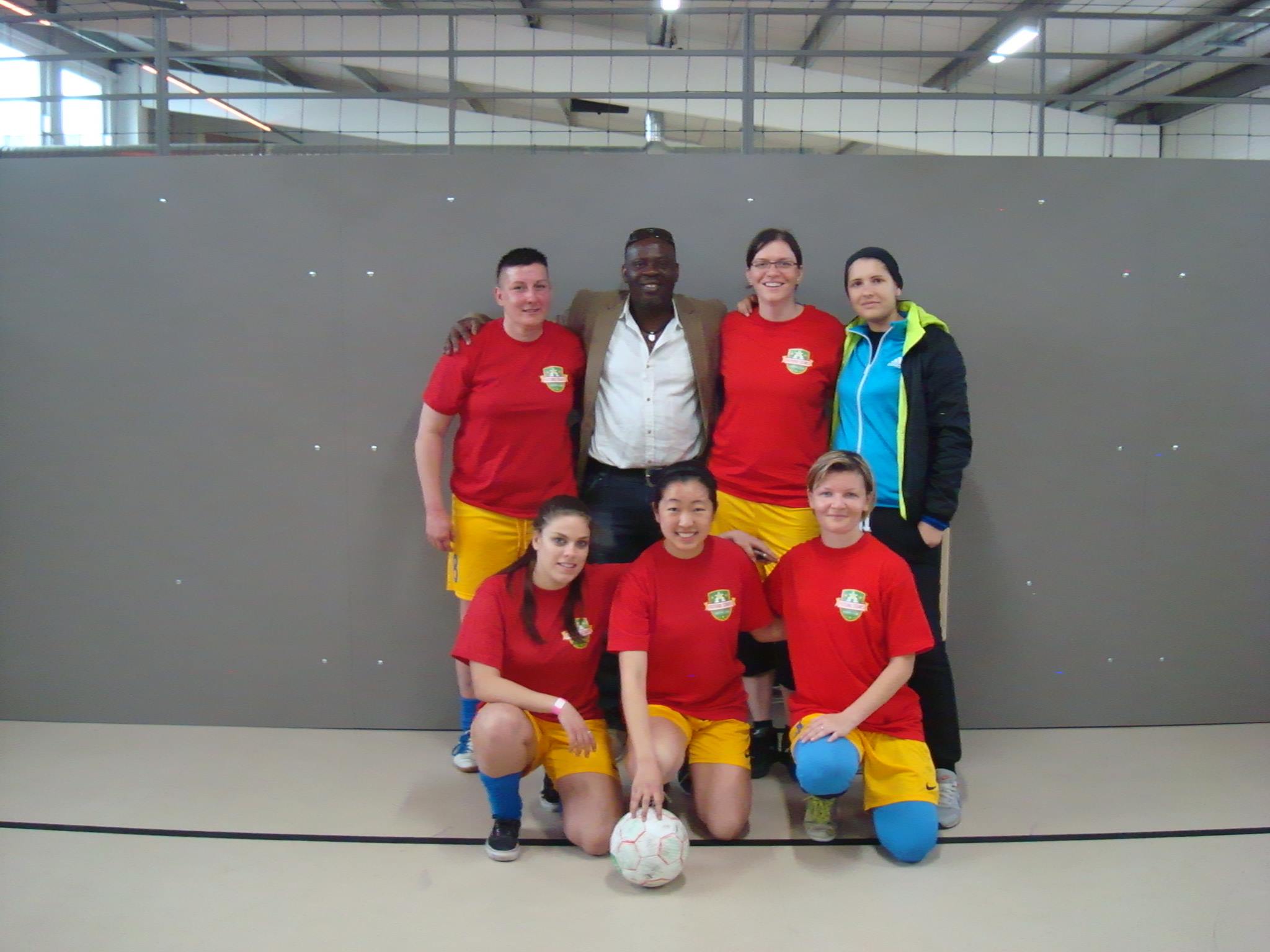 My athletic ability may be mediocre at best, but that's how I nonetheless ended up playing soccer here in Budapest three times a week. For the camaraderie, conversations, and sheer unadulterated fun: here's to the best sport in the world!