I've dreamed about visiting Berlin since I was 14, sitting Herr Stark's German I class and being immersed in the loud, vibrant language that is Deutsch. In Frau Michalak's German II class, we even created presentations for a project called "Reise nach Deutschland," in which we planned a week long trip to Germany, complete with Jugendherberge (youth hostel) bookings and public transportation plans. A few weeks ago, that dream became a reality, and I found out the hard way that reality has a way of tossing in (sometimes ugly) curveballs that dreams tend not to anticipate.

Clara, My (pronounced Mia), and I checked the name of the hostel we'd booked on Airbnb against the sign above the entrance in front of us: "Berlin Hostel." This was it. We walked in to behold a large, dimly lit room with cracked tiled floors, a few torn up couches along the wall, and 15 or so shirtless men lounging around and playing pool. Interesting. At the reception desk, My showed one of the men our booking on the Airbnb app.

"Hmm? Airbnb is illegal here."
"What? But we already paid!"
The guy turned to his partner, "Hey Mario, do you know anything about this? Do we use Airbnb?"
Mario took a look at our confirmation page. "Oh yeah, I think they used to sell some of the rooms on Airbnb too. This is next door at Aap Hotel though. I can take you guys there."

We followed him down the hall and through a door; apparently Berlin Hostel and Aap Hotel shared the same building. The lady at the counter of Aap Hotel took one glance at our booking and snapped, "Check in was at 6 pm. You missed it, so we gave away your room."

"WHAT?! There's no way, we already paid! Plus, your manager told us we could check in between noon and 10 pm and it's only 8!" We showed her the message, but she barely glanced at it. "The online site didn't know we were already full and sold more rooms than we have. We have no rooms for you to stay in tonight." Even Mario the receptionist looked perturbed. He asked, "What do you mean? My hostel's already full, is there really nothing you can give them here?" The lady threw up her hands, "There are no rooms!" With no other option, we stepped to the side. A sizable line had gathered behind us, families, couples, singles, and we watched the shock, then anger, then despair play over their faces as they were one by one all unsympathetically turned away.

"Can we at least get a refund?"
"Talk to the booking site, not me."

To say we were frustrated would be an understatement; by now it was almost 11 pm and we were on the outskirts of Berlin with nowhere to sleep for the night. Moreover, the WiFi in the lobby was so unstable that only My's phone would connect, so to seek help, we had to take turns logging in and out of our Facebook accounts on My's phone. "What if we just went to a bar and stayed out all night?" suggested Clara jokingly. "Alternatively, we could install Tinder and ask if anyone will let all three of us crash for a night." "Haha, unfortunately, we don't have wifi…" Every hostel that we looked up was completely booked. Hundreds of people were looking for a last minute place to stay on CouchSurfing. It was now almost midnight.

Seeing the worried looks on our faces, Mario walked over to us and said, "girls, if you can't find anything, I can give you my room. I have the night shift tonight, anyways." Surprised and grateful, we quickly accepted his pity; as several others who were turned away from the hostel settled for sleeping in the lobby, Mario went to clean his room. After much confusion at the check-in desk, by 1 am, Mario handed us the key to his room.

The Berlin Hostel takes the prize for the #1 sketchiest place I've ever stayed in: the bathroom was dark and dingy with no mirrors, no soap at the sinks, no toilet paper (thank god I carry soap and napkins when I travel), and no shower curtains. Only one of the stalls had a working shower head. Posters for the horror movie "Hostel" hung on the walls. Our pillows were ragged and uneven, and there were no personal linens to cover the blankets with. But after an exhausting day, the generous Italian receptionist's beds were already more than we could've hoped for.

The remainder of our Berlin trip went far more smoothly, and the rest of this post will consist of photos: 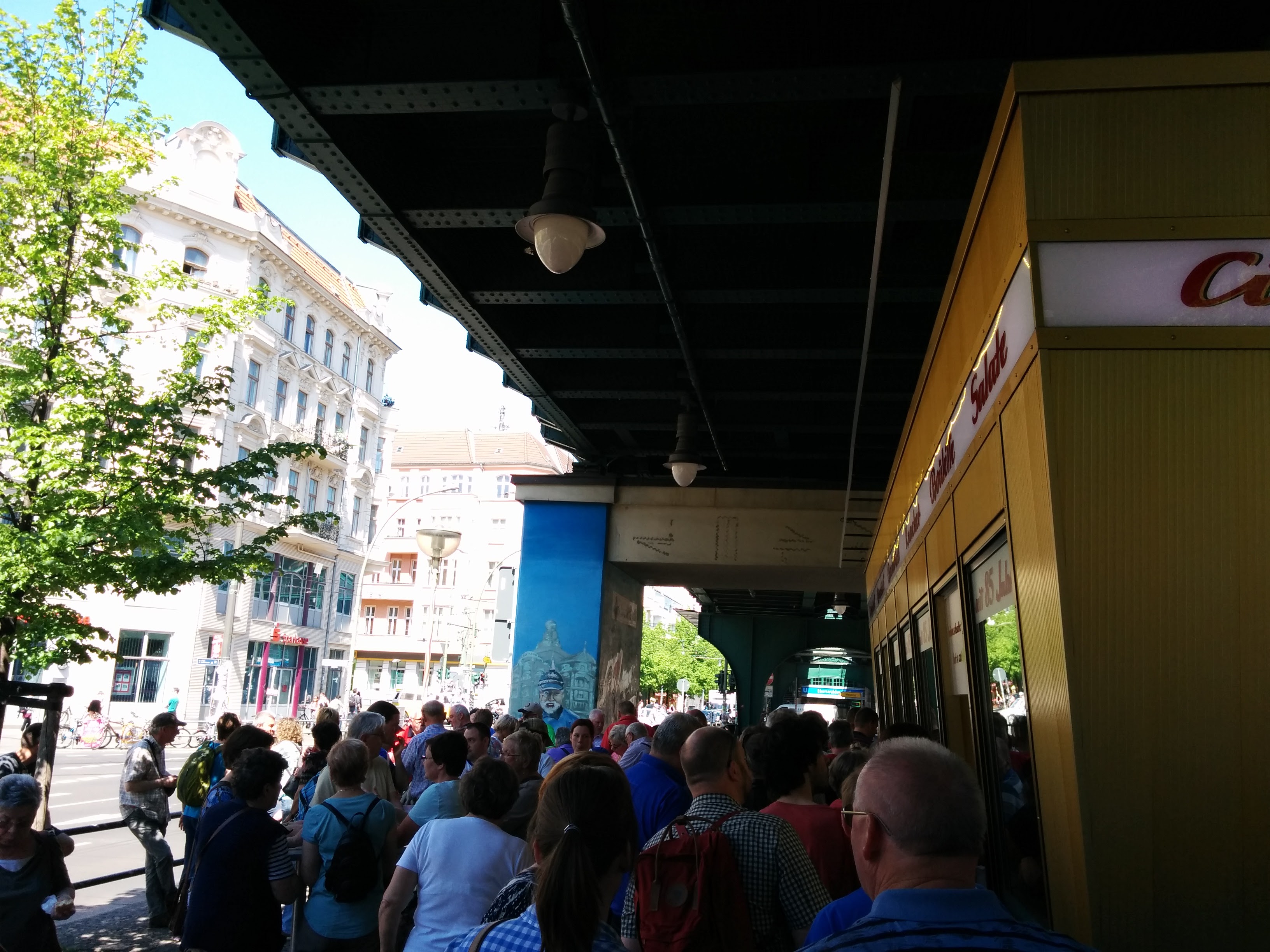 The line at Konnopke's Imbiss, the #1 rated currywurst stand in Berlin 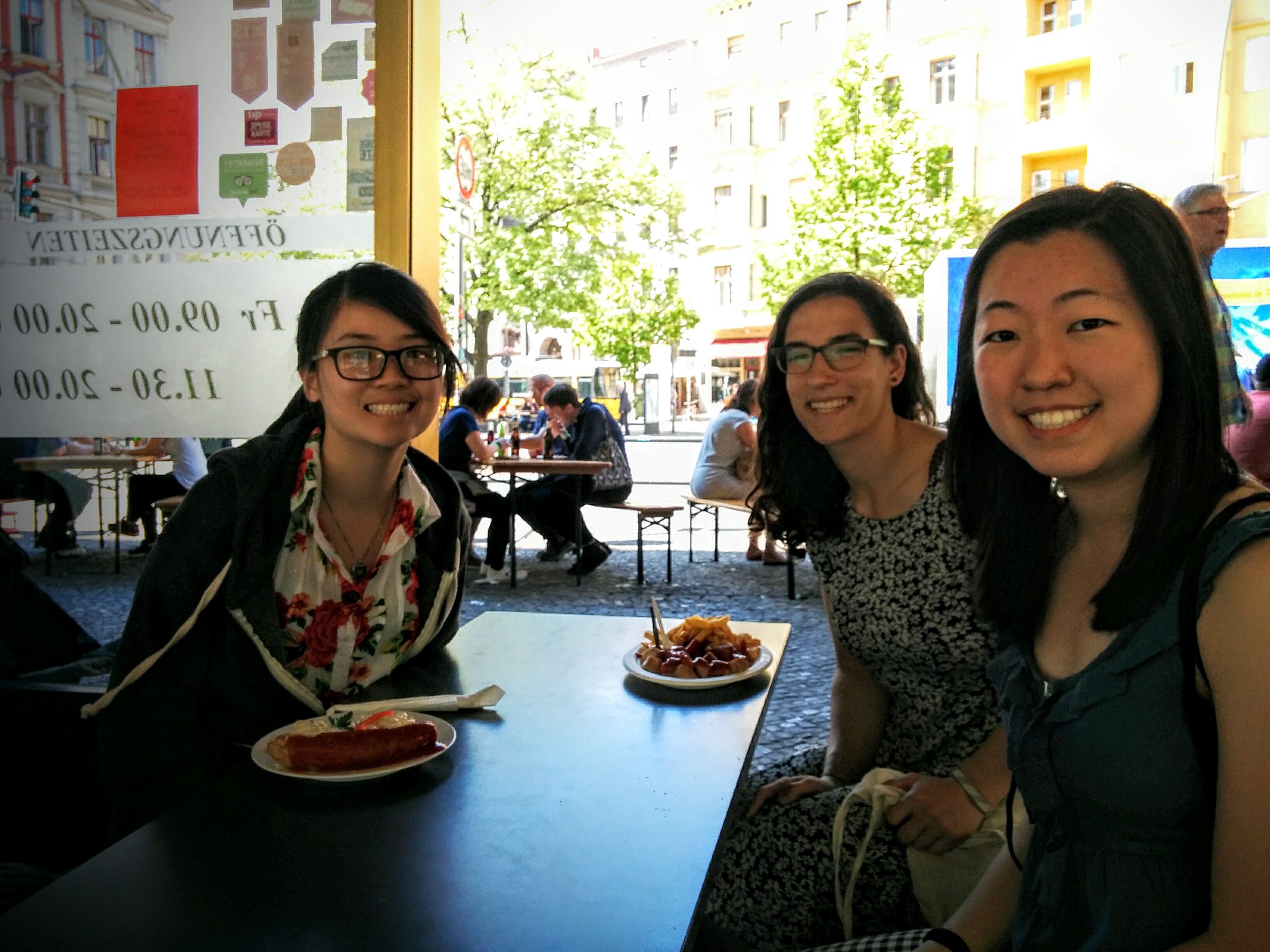 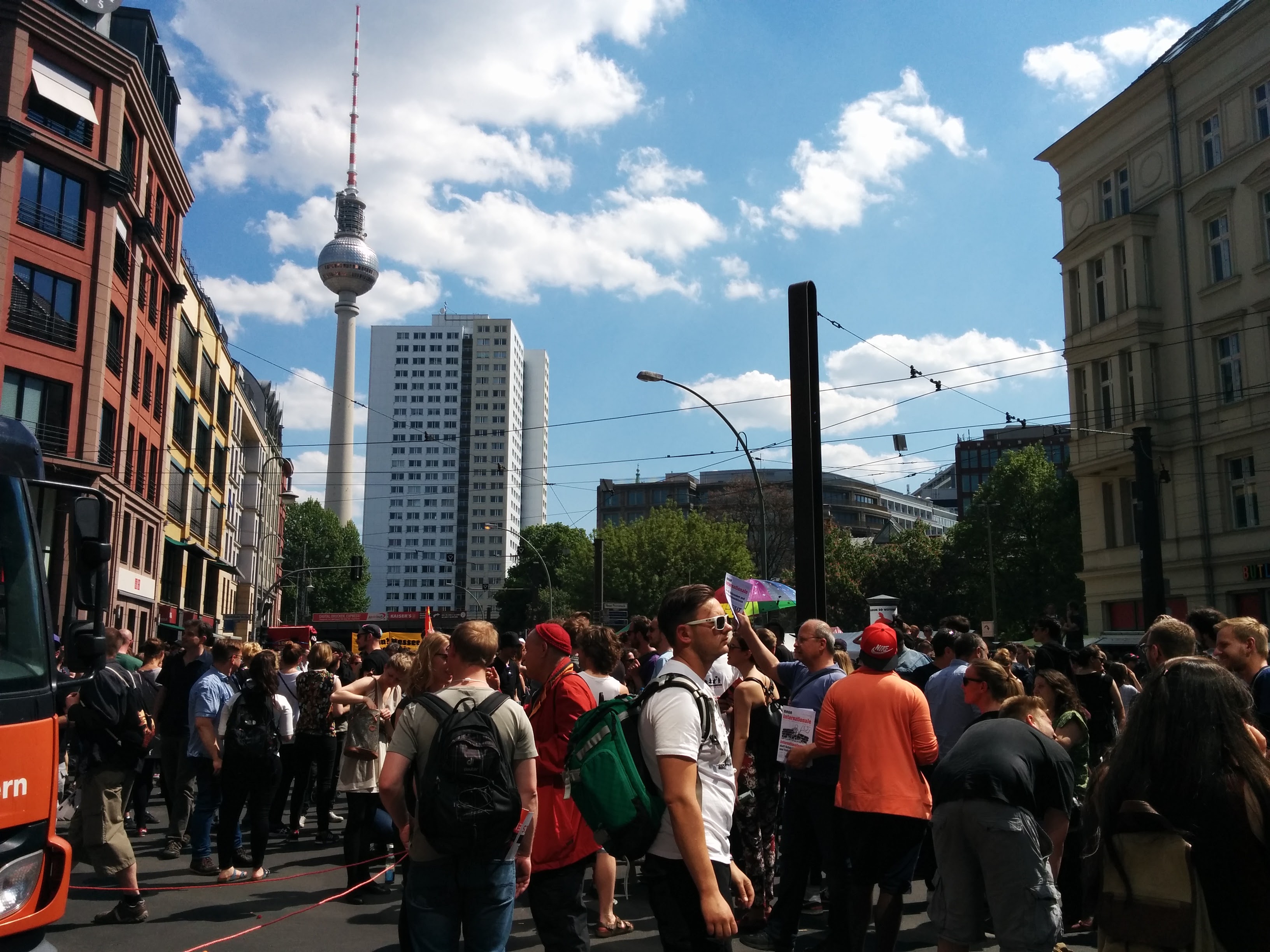 In which we accidentally stumble upon an anti-Nazi, pro-refugee demonstration 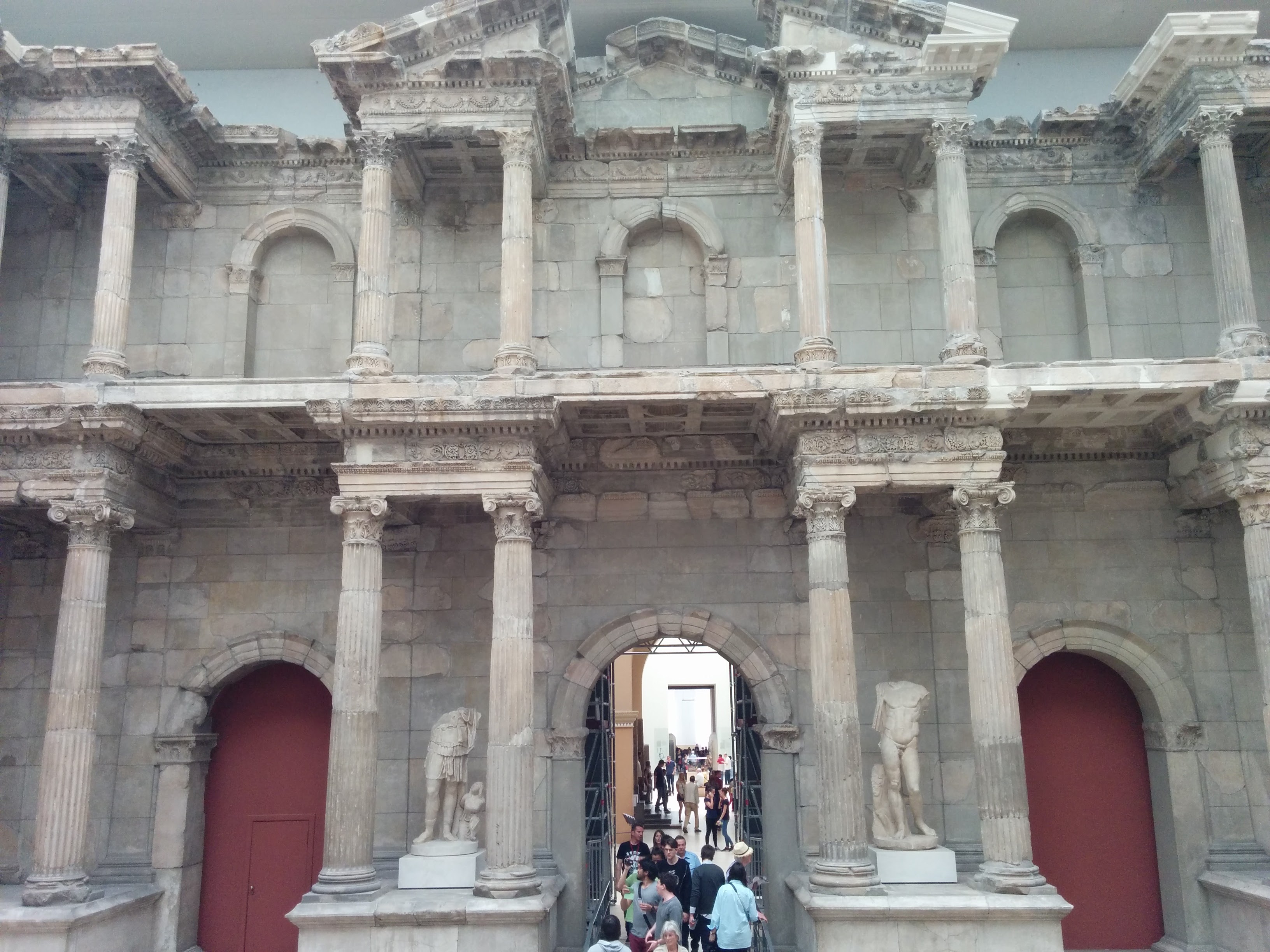 The Roman Market Gate of Miletus: excavated, transported, and reconstructed in the Pergamon Museum in Berlin. The Pergamon is without a doubt the best museum I've visited in Europe (and I've visited a LOT of museums here). 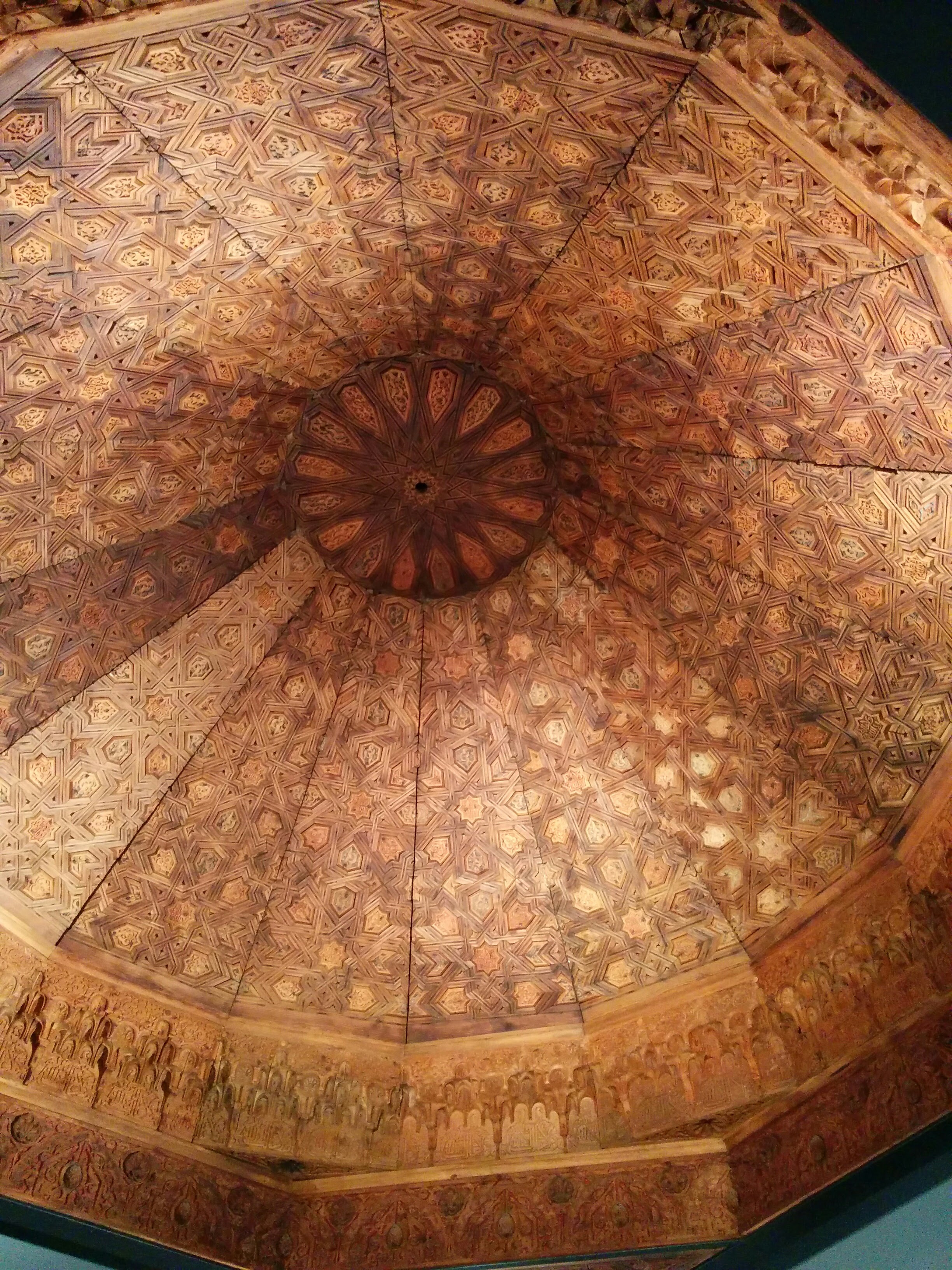 Cupola of the Spanish Alhambra 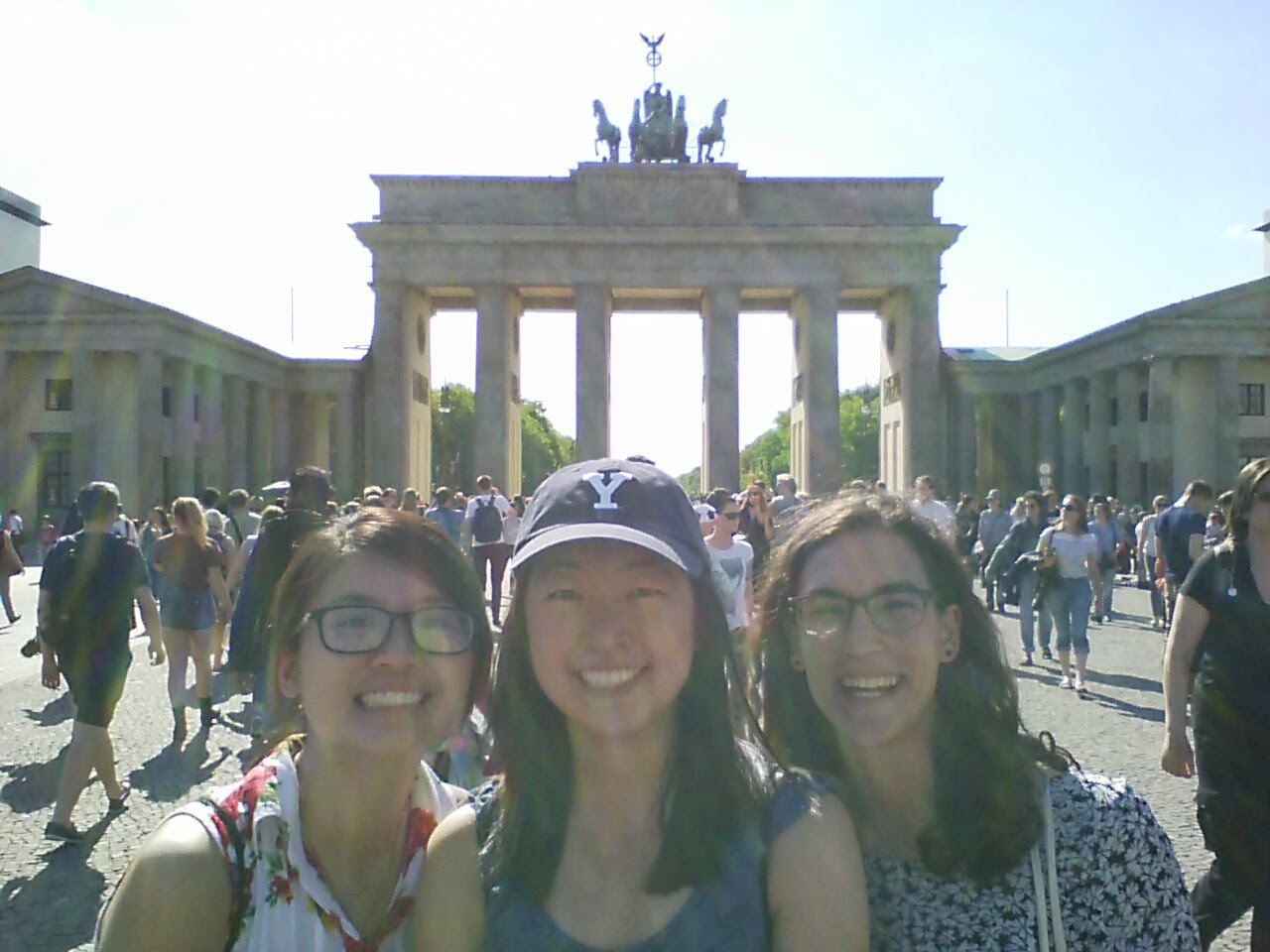 In front of the Brandenburg Gate 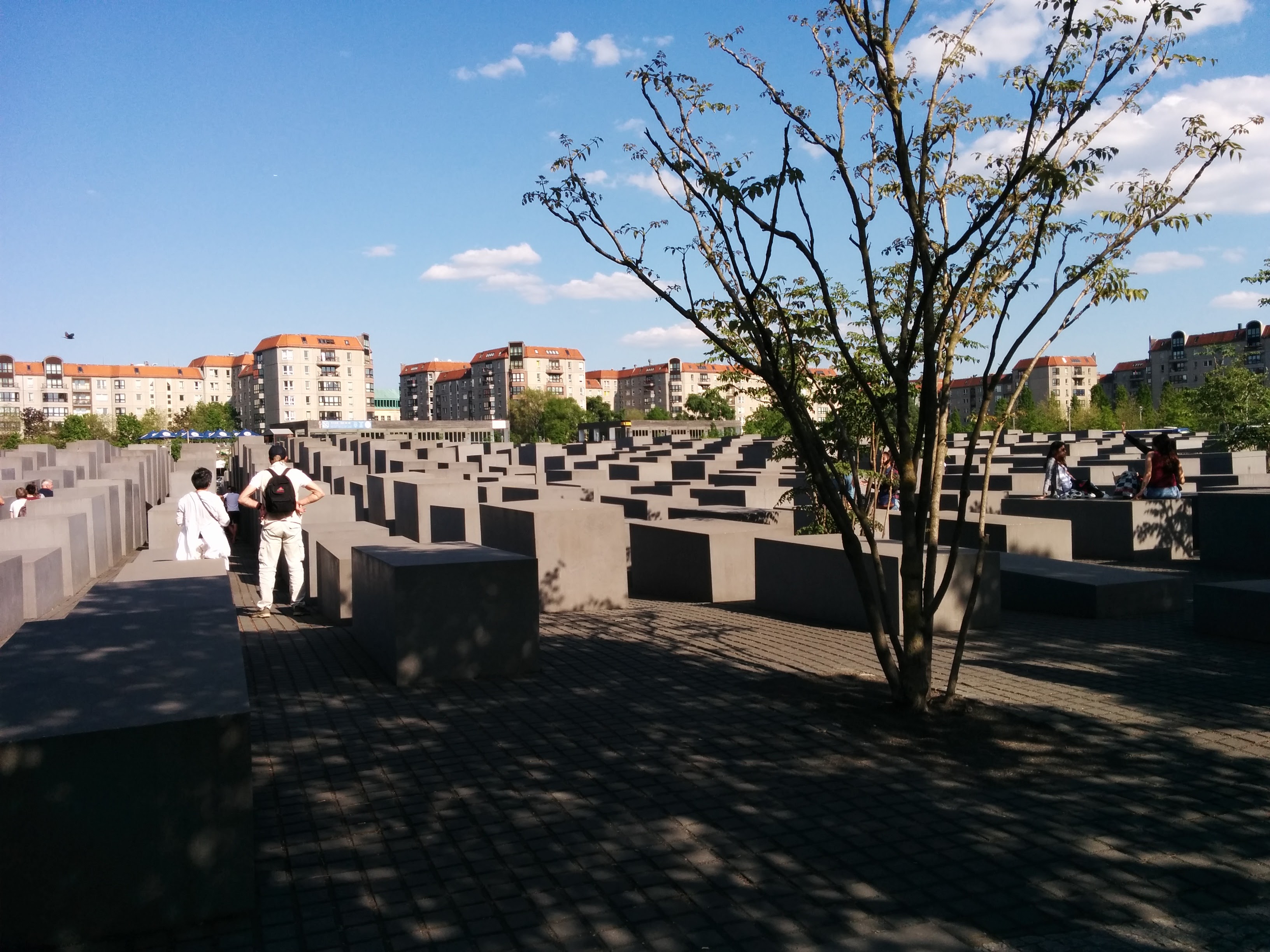 The Memorial to the Murdered Jews of Europe is experiential: the narrow path between slabs ensures that walking through is a solitary endeavor, at any given moment, you can see only in a single direction, and people in front of and behind you often to disappear from view 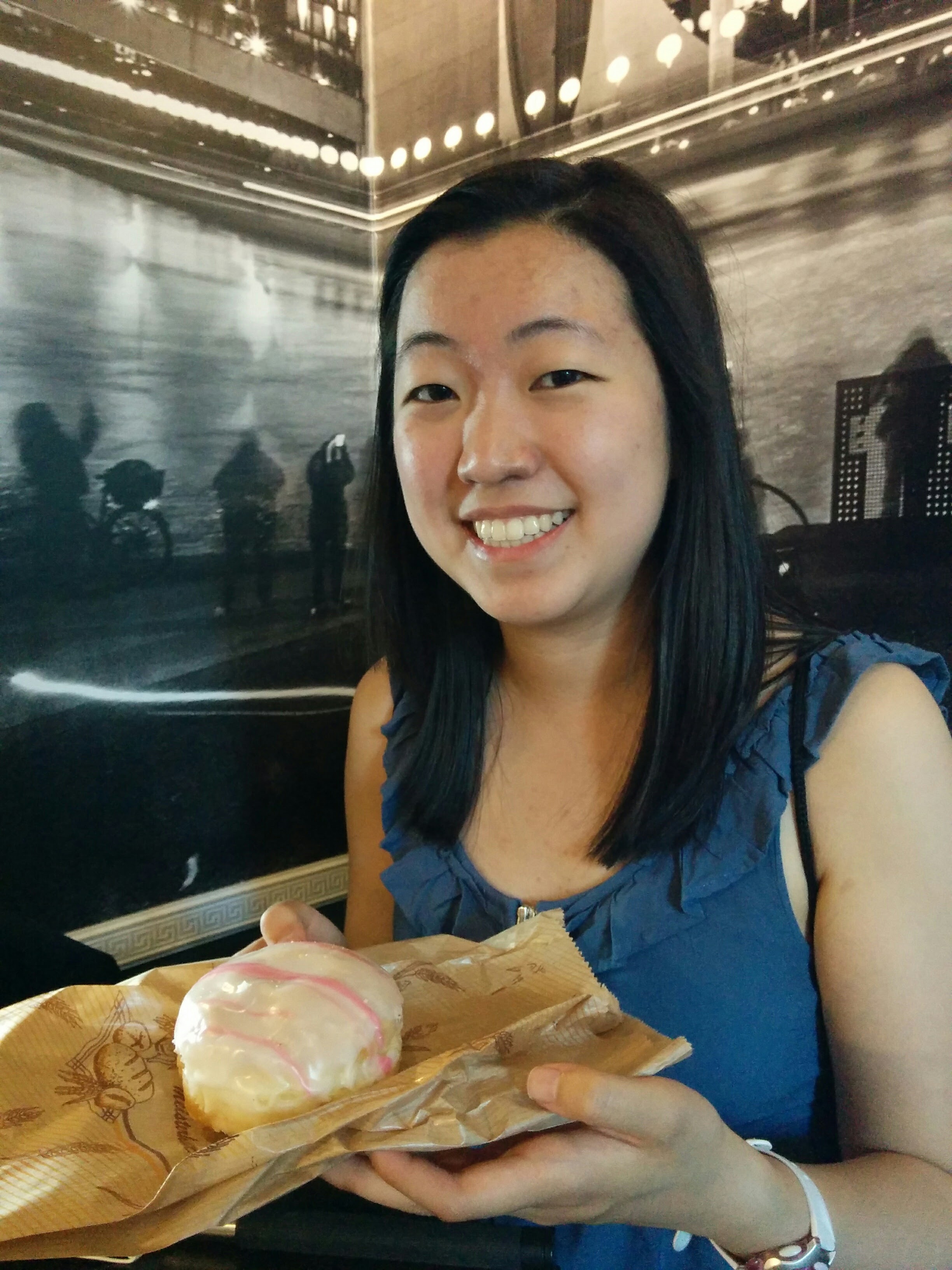 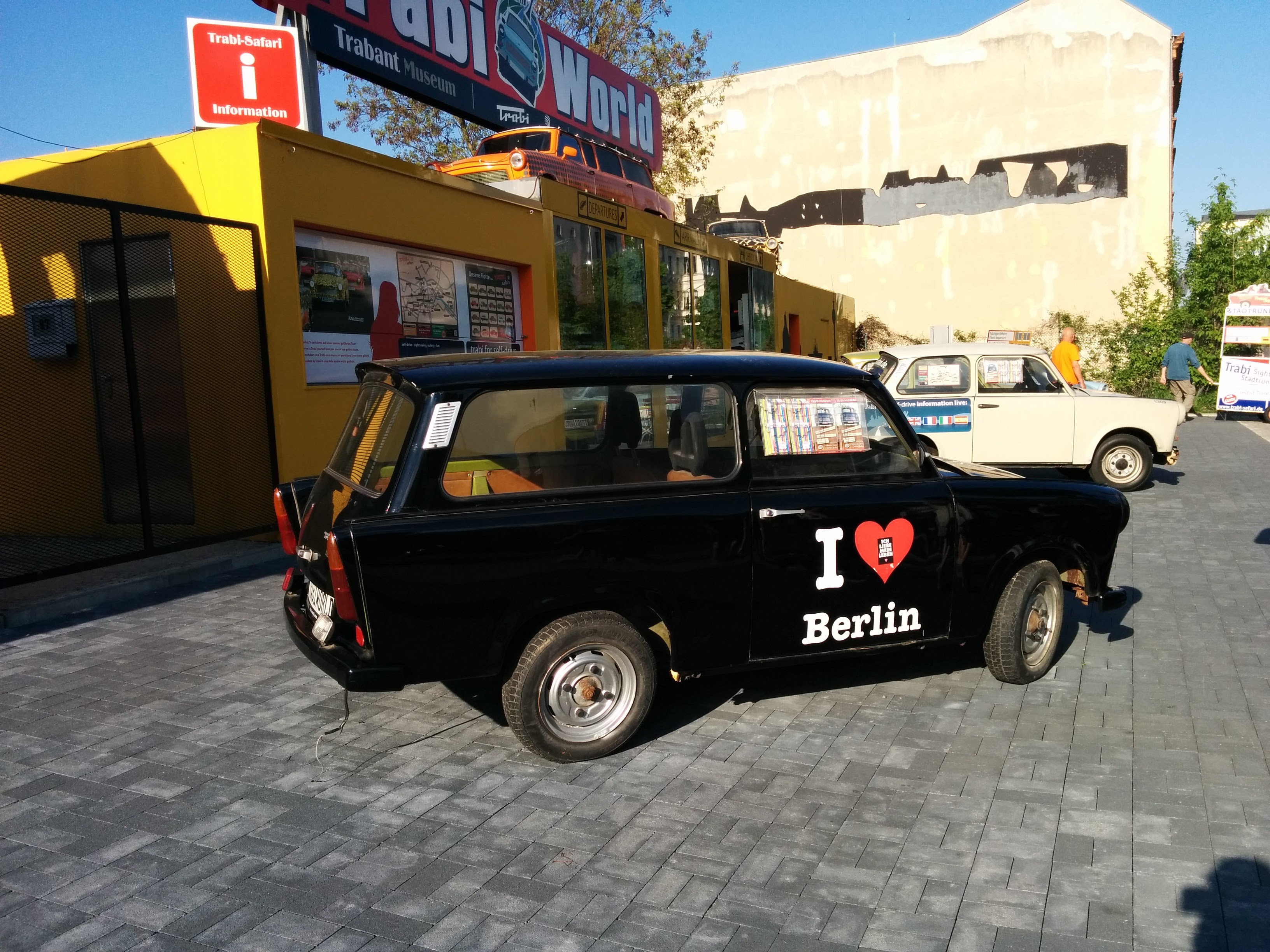 A "Trabi": a Soviet-era East German car with a frame literally made from plastic and cardboard. It could take up to 15 years for a family to receive a Trabi after they paid for it! 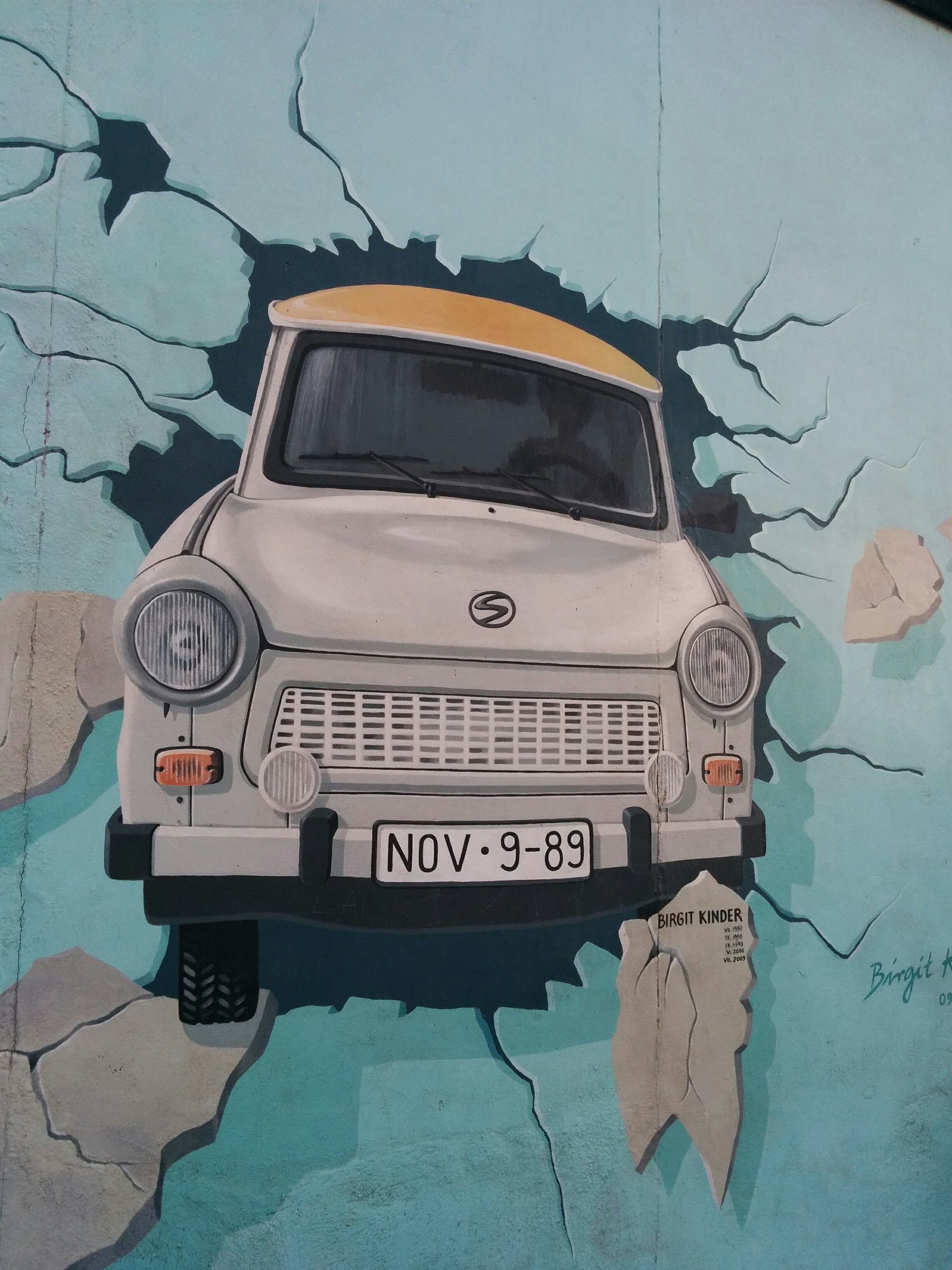 An iconic mural of a Trabi car breaking through the Berlin Wall at the East Side Gallery. Of course, given how flimsy the Trabi is, this would never happen in real life. 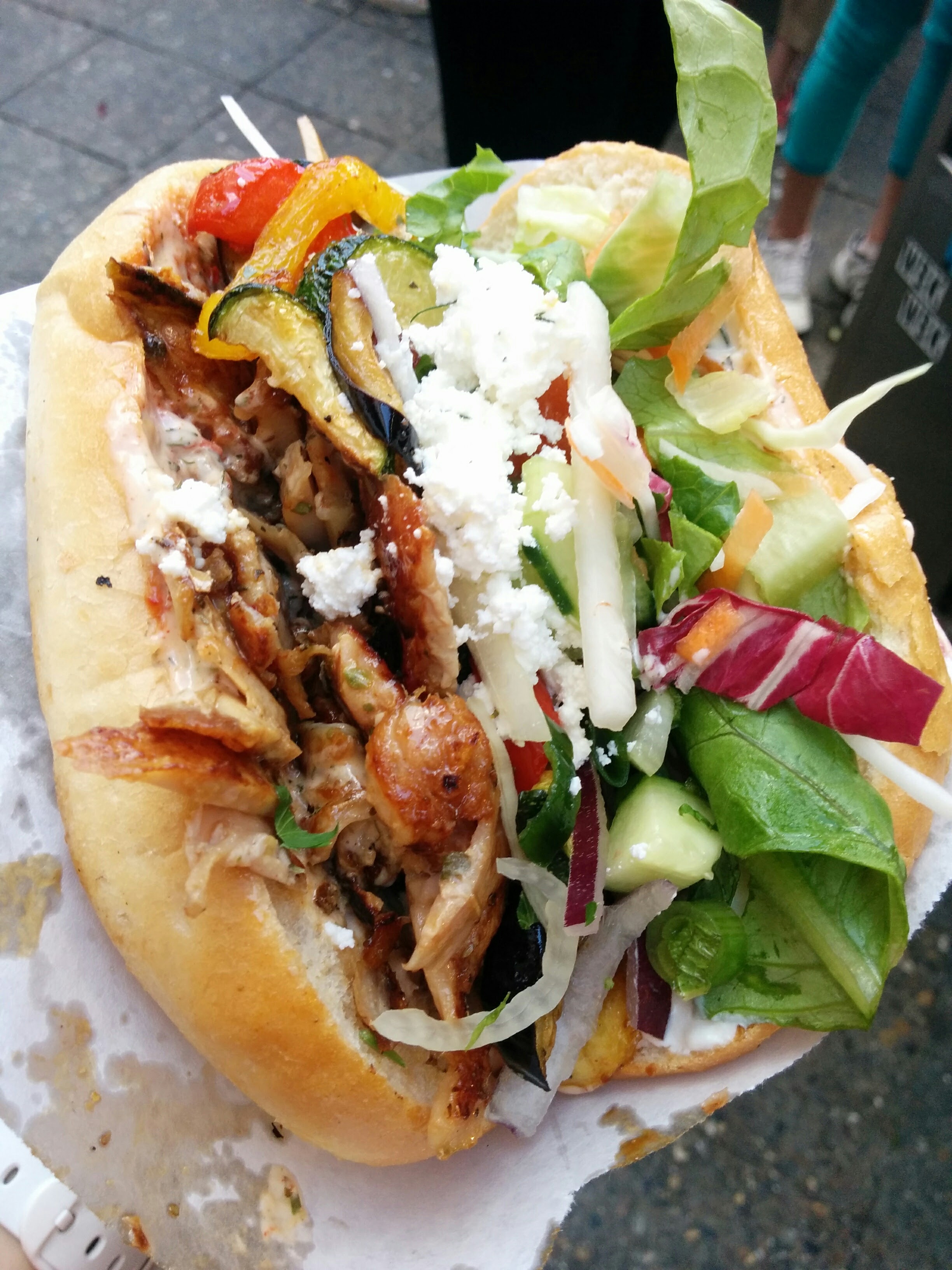 I waited 40 minutes for this cheap, delicious doner from Mustafa's 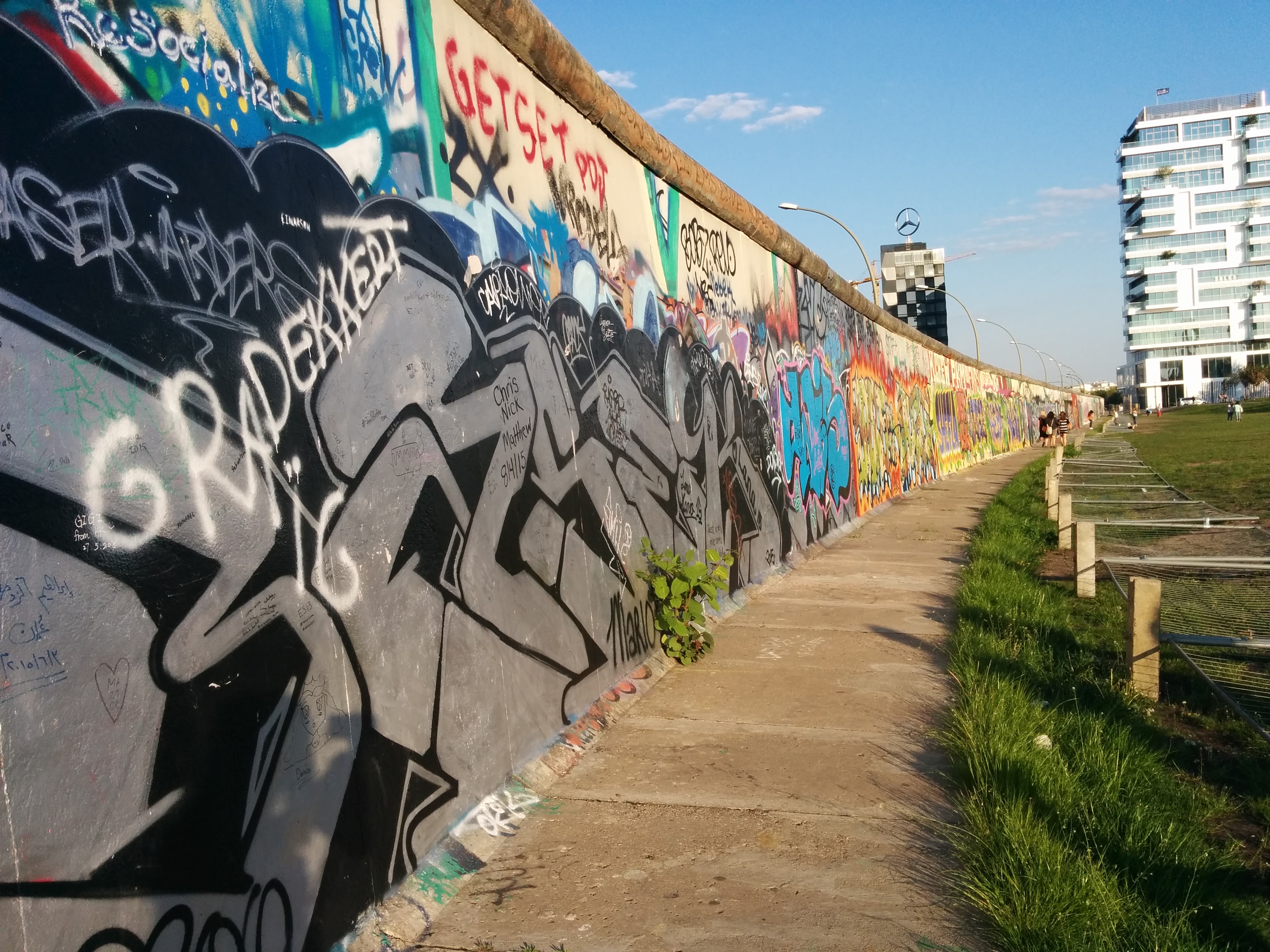 The East Side Gallery: a 1.3 kilometer section of the Berlin wall that has been transformed by art into an international memorial of freedom 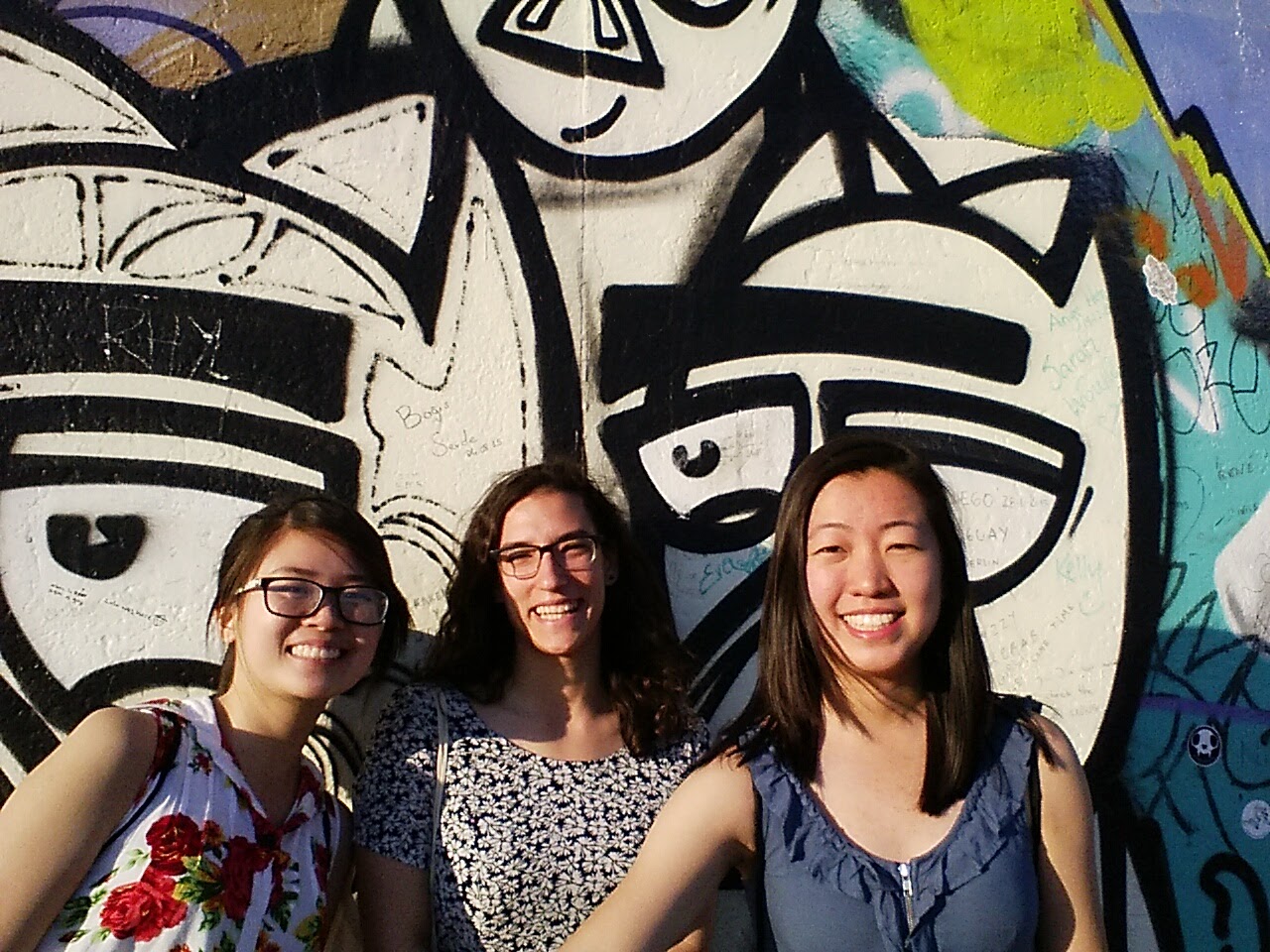 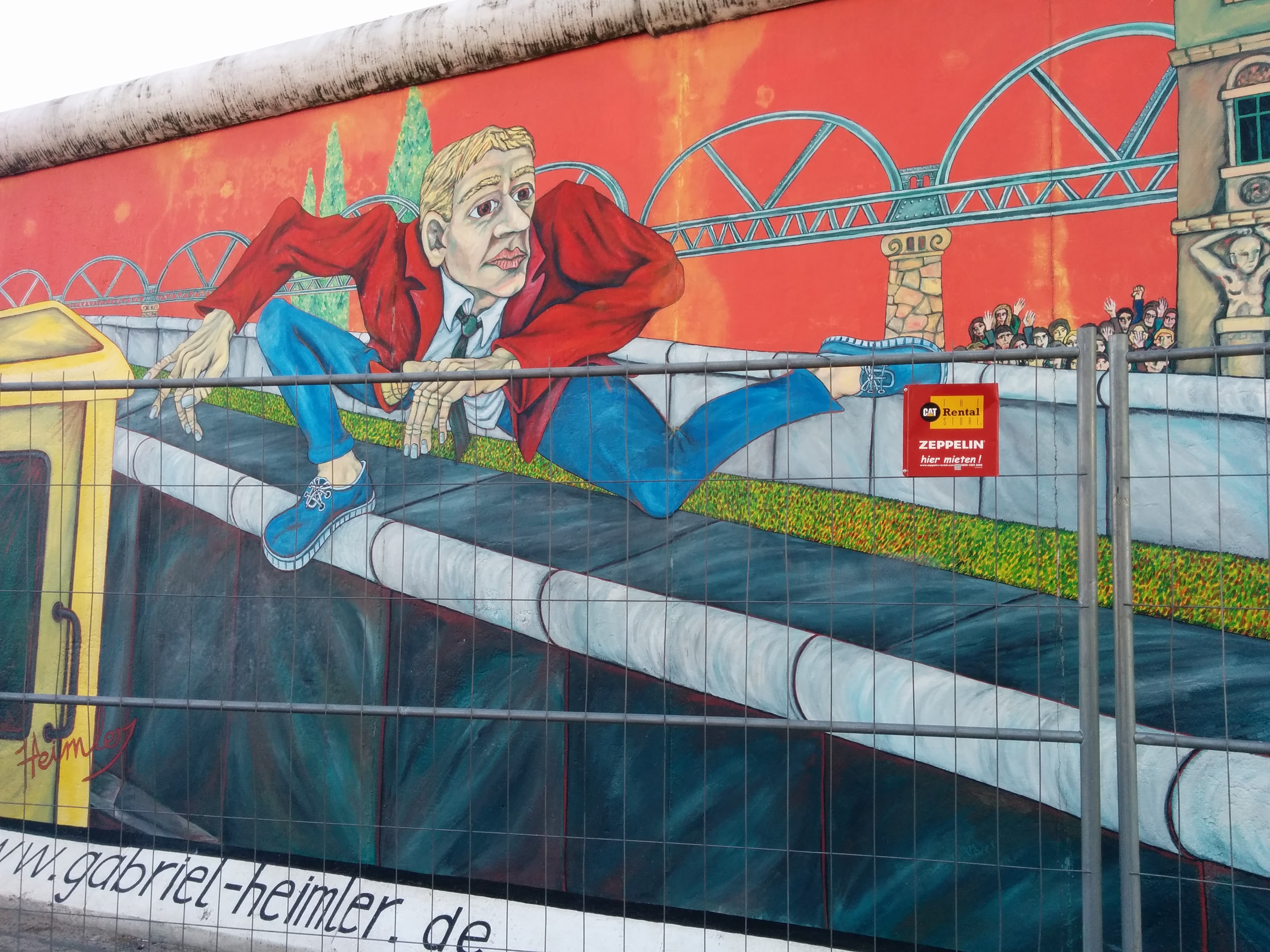 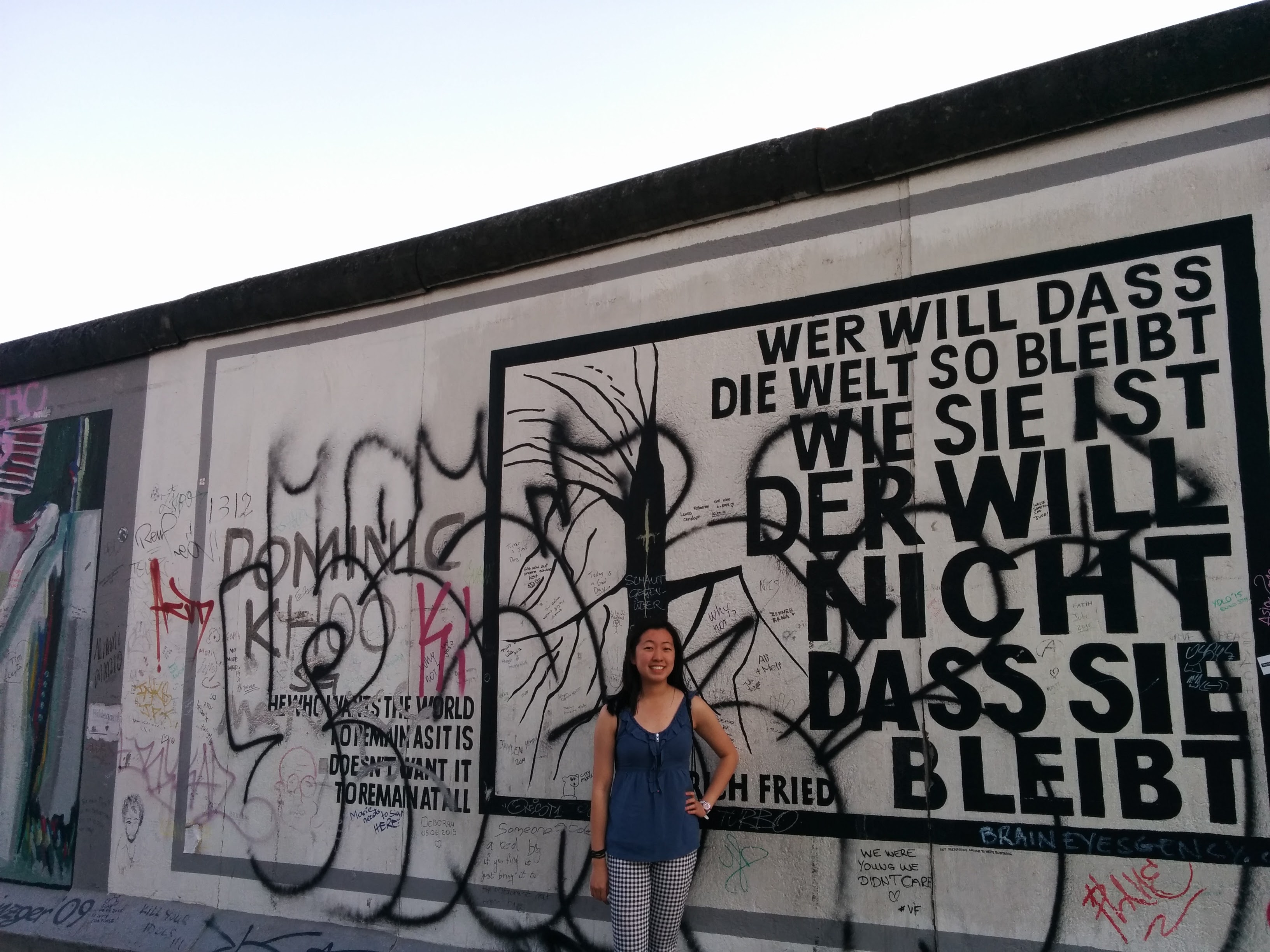