To put it bluntly, Hungary's been on the wrong side of history just about every time. After Saint Stephen founded the country in 1000 AD by uniting the nomadic, pagan Magyar tribes under Christianity, the Mongols almost immediately charged in, followed by the Ottomans. The Habsburgs rode in as knights in shining armor, only to engulf Hungary in the Austro-Hungarian empire. As such, they lost World War I and were forced to concede over half of their territory in the aftermath of the Treaty of Versailles. Bitter about their loss of land, Hungary willingly signed on with Nazi Germany for World War II, in return for Hitler's word that their lost land was theirs to reclaim. Well, we all know how well that worked out. The Russians then marched in to liberate the Hungarians from the Germans… and apparently forgot to leave. All the way until the collapse of the Soviet Union in 1989, Hungary was under Communist rule. Today Hungary is a democracy. One with a single party, that is…


So with the exception of some countries in Africa, Hungary is possibly the most invaded and occupied country in history. Every attempted revolution failed; it's really quite tragic. When my dad and I scaled Gellért Hill and saw the "Liberty Statue" up close, he remarked, "it looks like she's surrendering her sword," which really captures the whole "please, just leave me alone" mentality I get from learning about the country's history. It also makes it easier to sympathize with the generally pessimistic outlook said to characterize Hungarians. 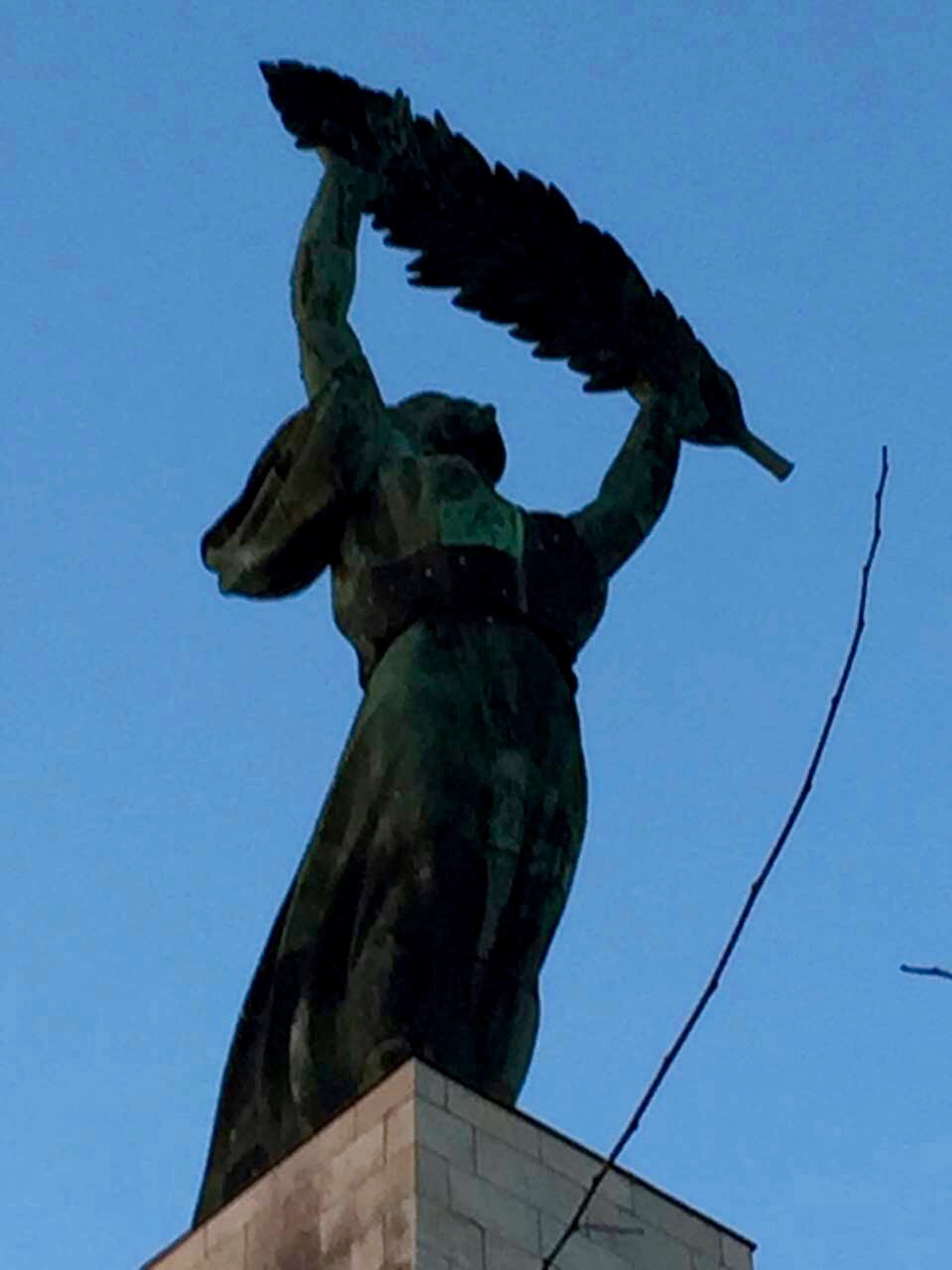 The liberty statue atop Gellert Hill


A Chronologically Ordered Assortment of Moments:

Budapest has an obsession with statues and rubbing them. In my last post, I included an image of a horse that's supposed to help you find true love if you rub its balls. Below and to the left is a policeman who's supposed to help you find the best restaurant if you rub his stomach. The one on the right is a little messed up if you ask me; it's said that if you feel up the little girl's legs, you'll get good luck. Upon seeing our tour guide demonstrate rubbing her knees as a "more appropriate maneuver", one of the Turkish men declared, "I don't condone child abuse." Amen, brotha. 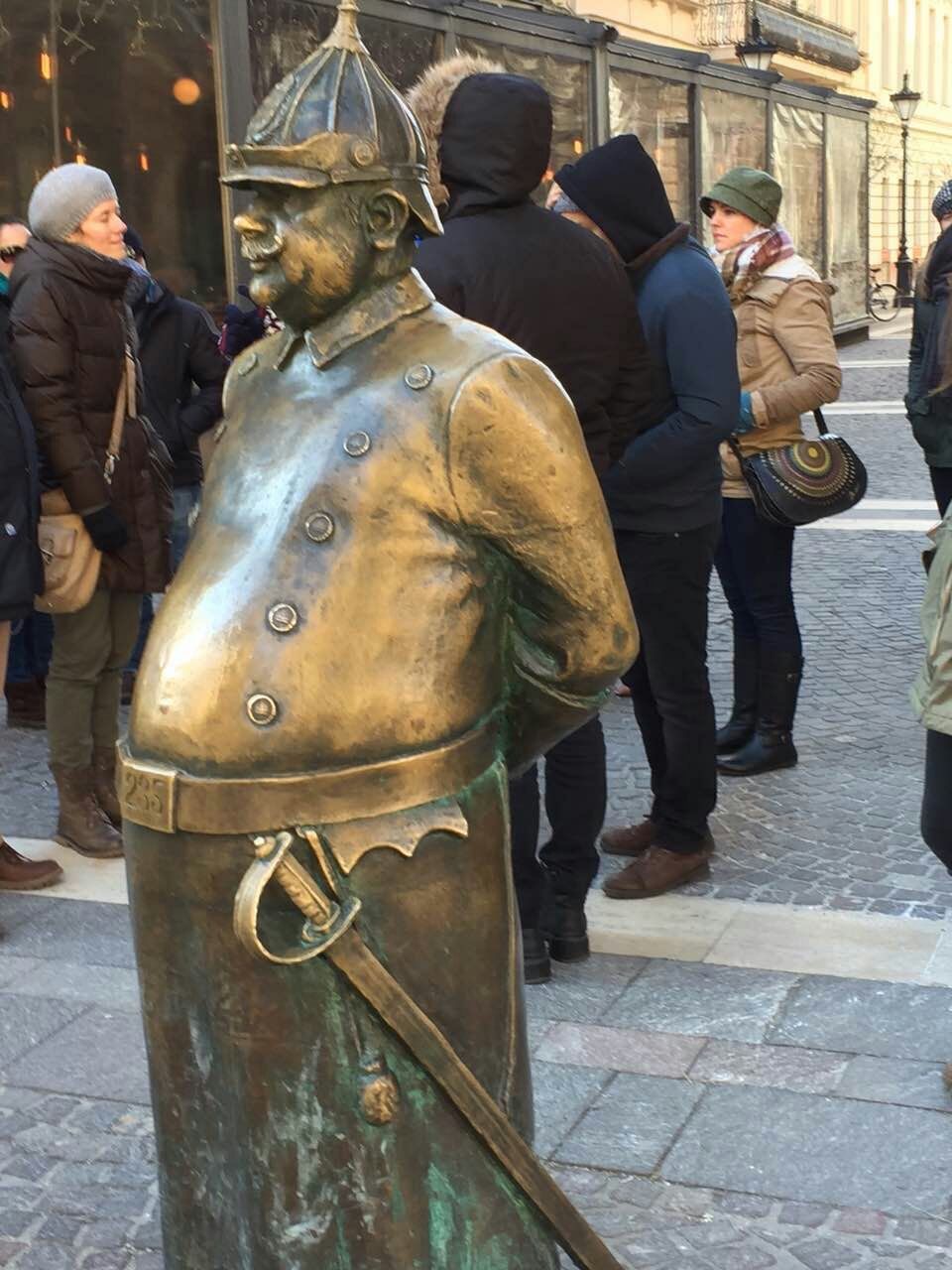 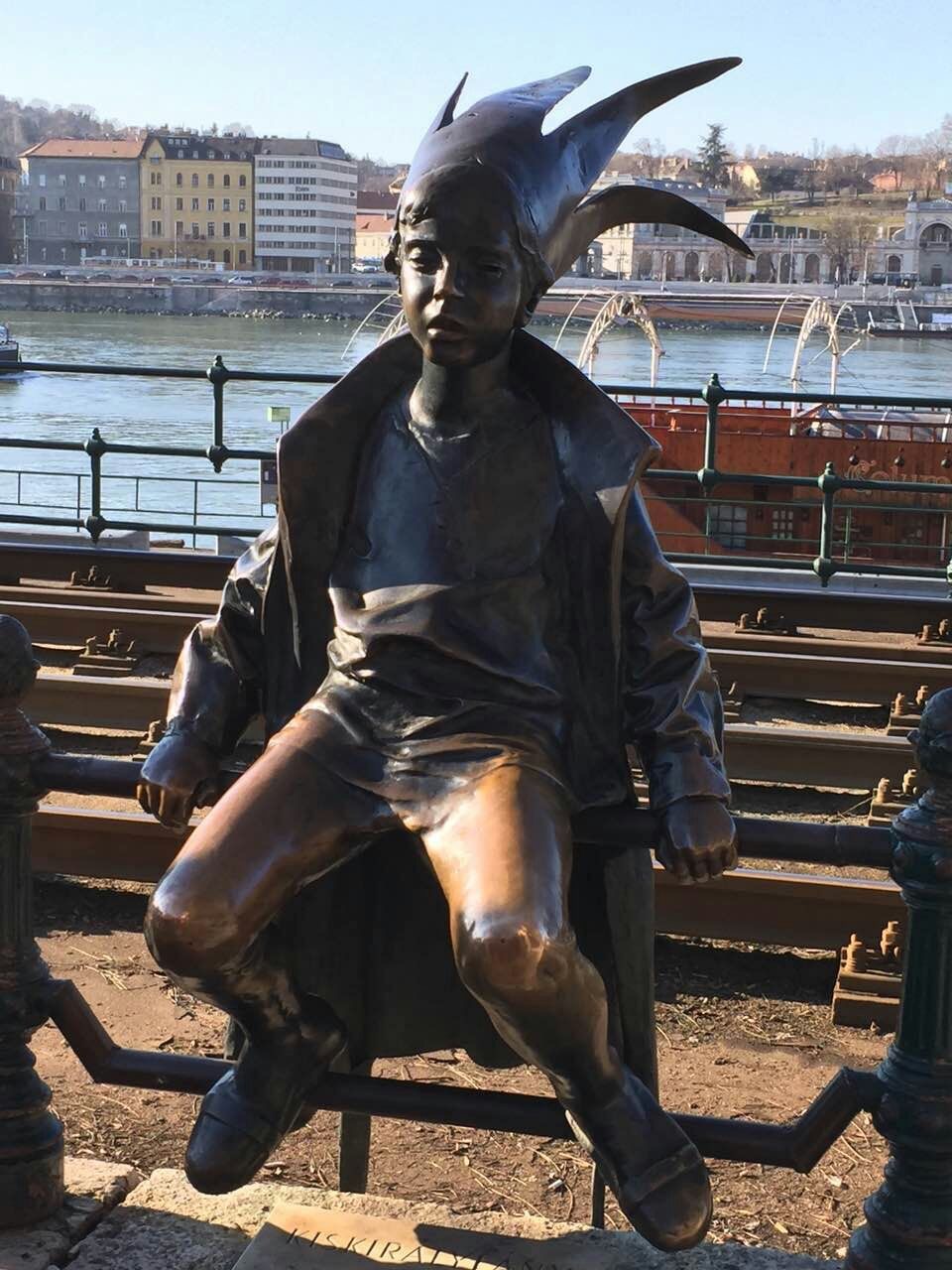 On Saturday, one of my classmates, Loring, and I spent three hours at the Hungarian National Museum, which from an architectural standpoint looks a lot like the American White House. By the way, here's an actual picture of the "Hungarian White House" and one of the guards outside, my apologies for the severe gopro fisheye (still trying to figure out how to use this thing). 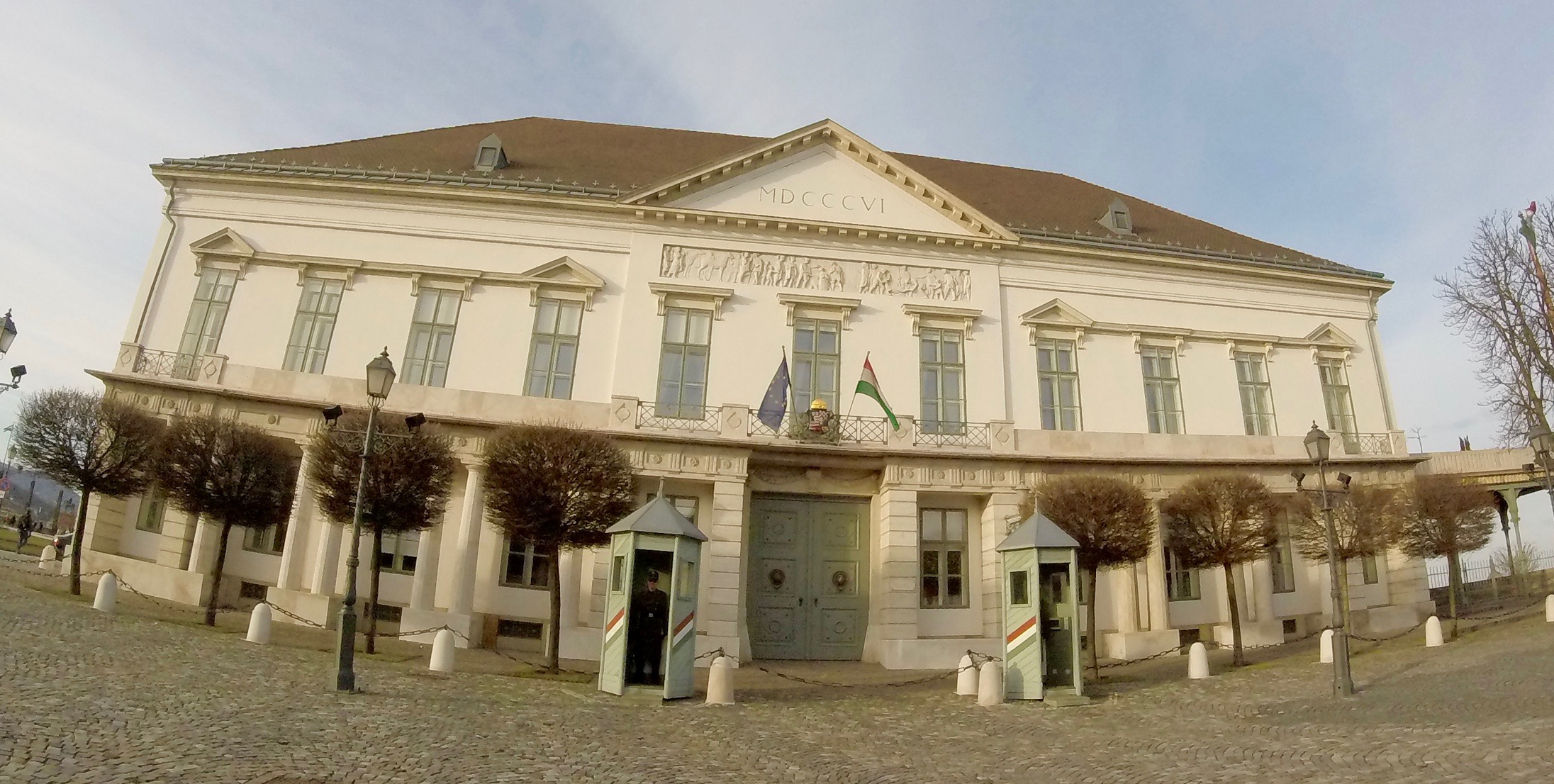 The residence of the Hungarian President 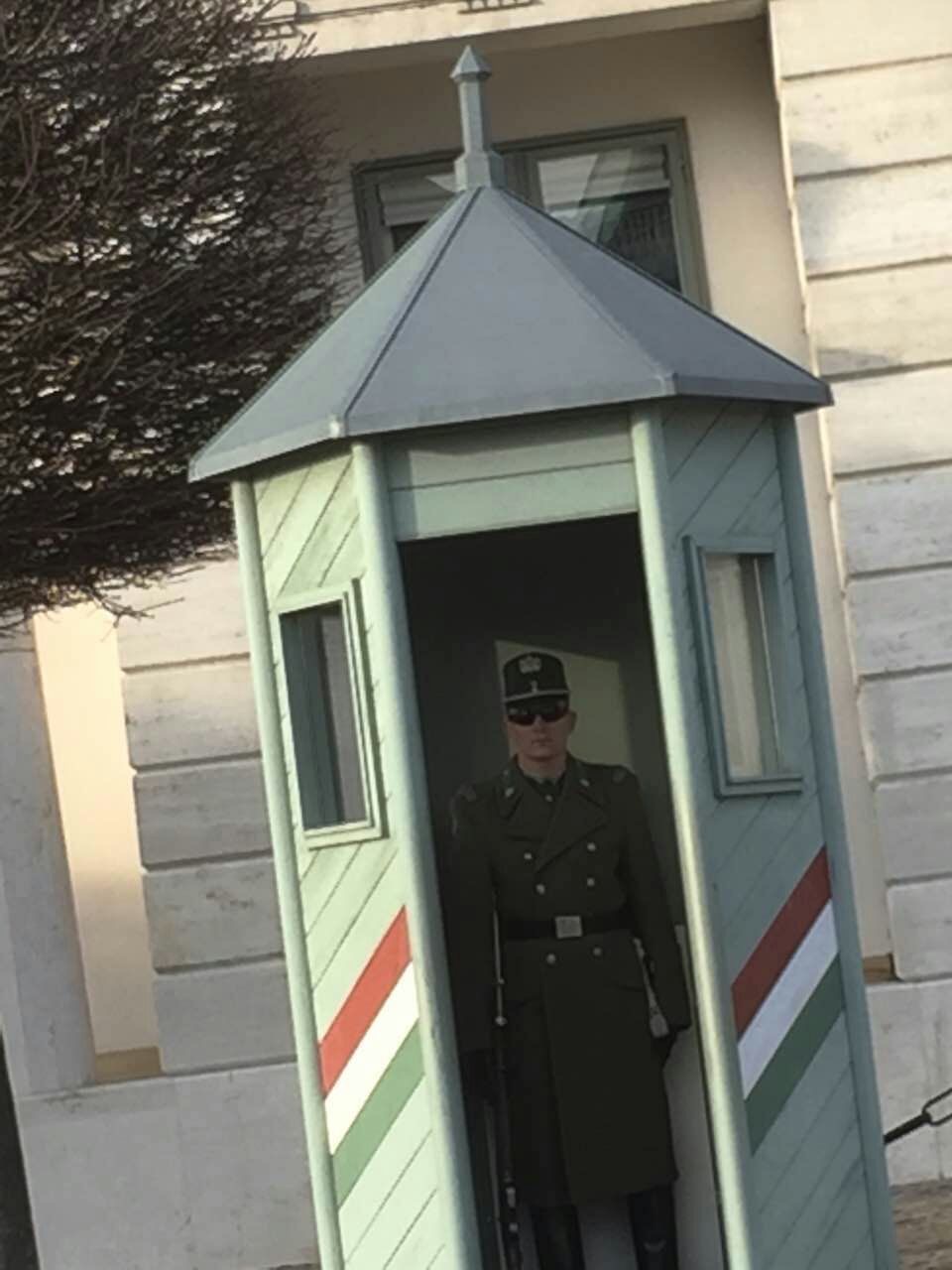 One of two guards in front of the house

The museum was pleasantly empty, although in general I've noticed that Budapest is a relatively sparsely populated city (1.7 M), especially compared to Hong Kong (7.2 M) and Chicago (2.7 M). Inside the museum, they've got historical exhibits covering time periods ranging from the Stone Age to the Cold War. 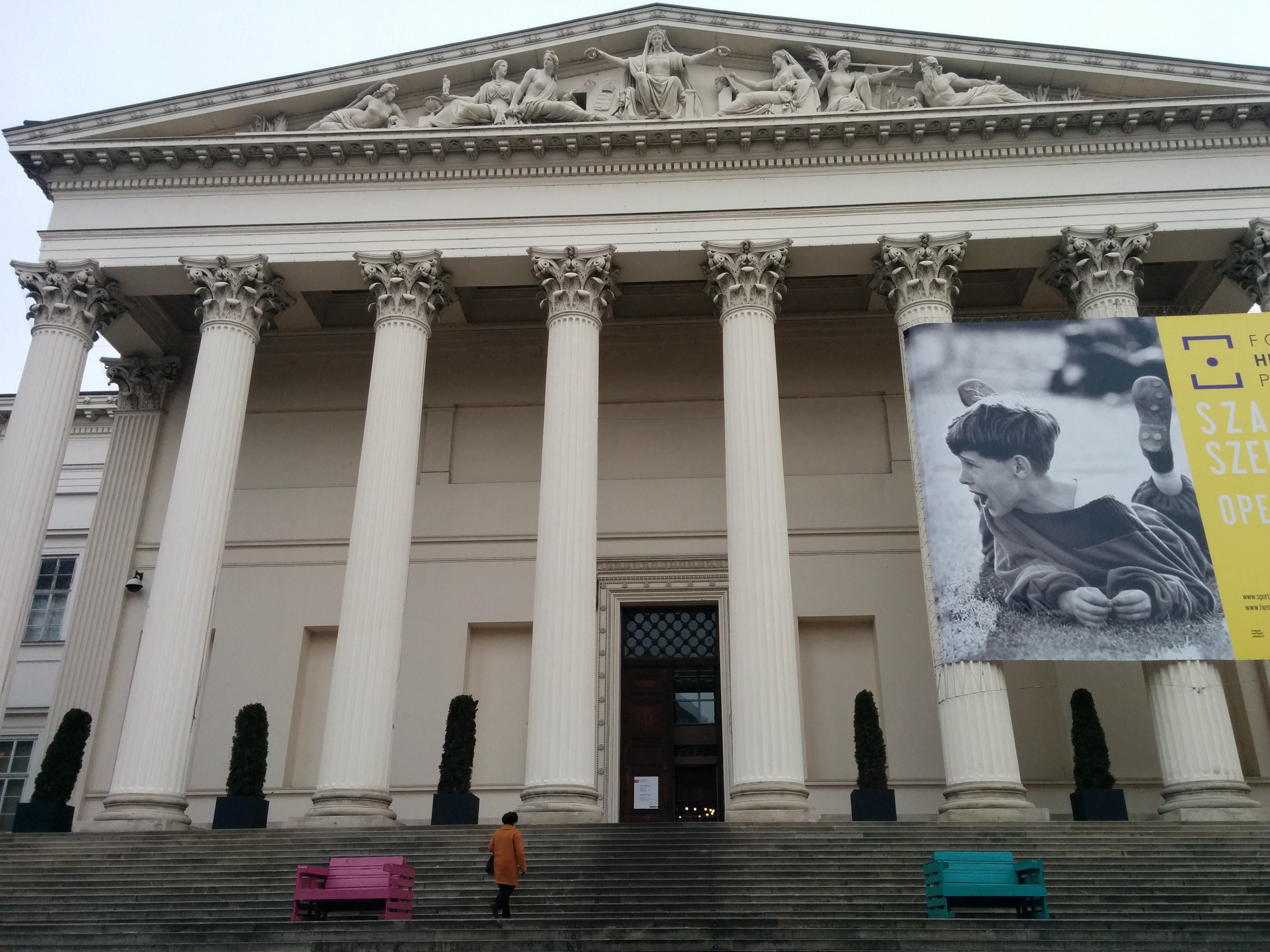 On Sunday, my flatmate Lily and I went on the Communist Walk, a free, tip-based tour that led us through Pest with a lens for Communist relics. One of our stops was this World War II memorial that people protest against daily. The memorial depicts a helpless Hungary (in the form of an angel) being attacked by a fierce eagle (Germany). 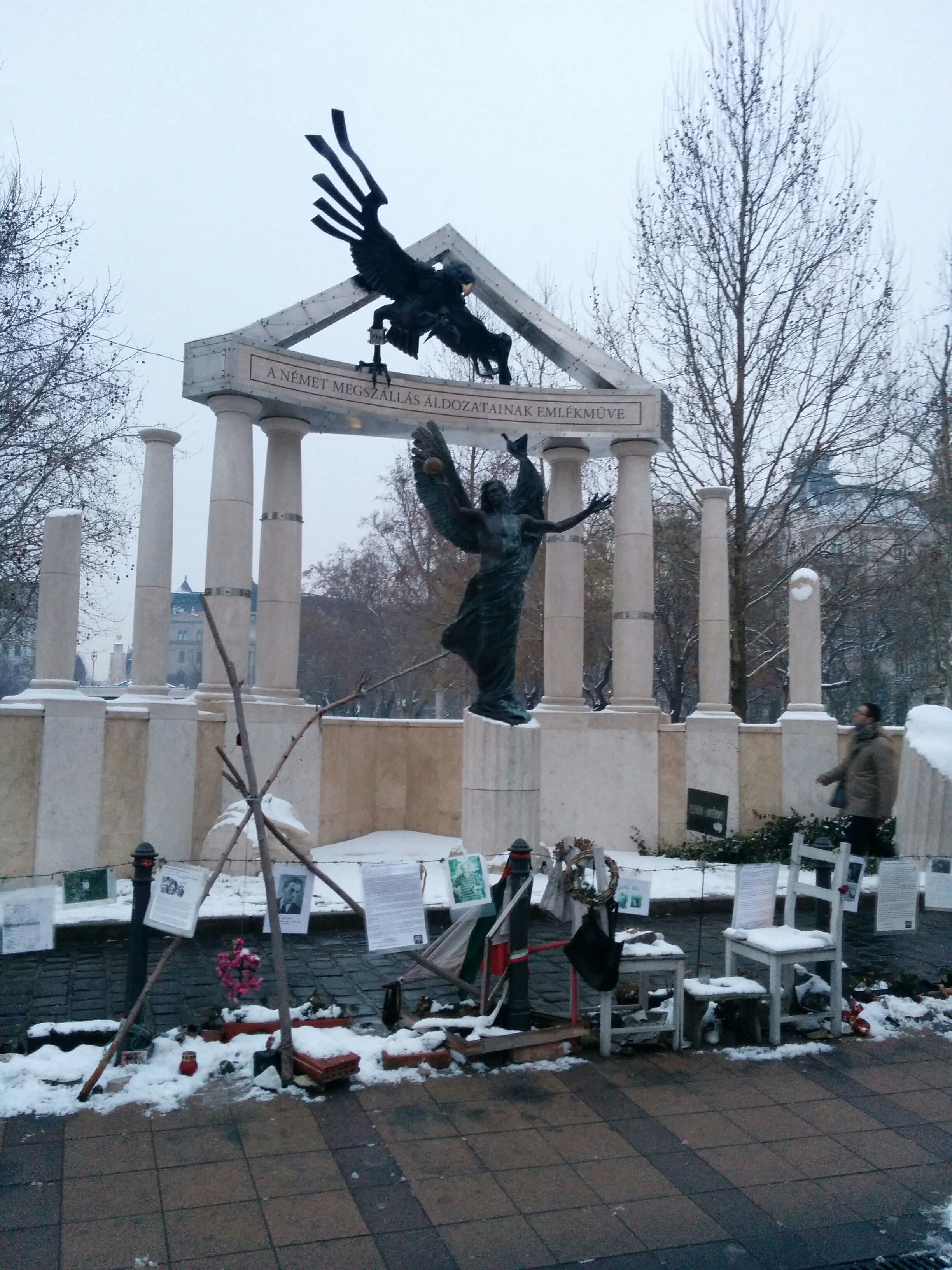 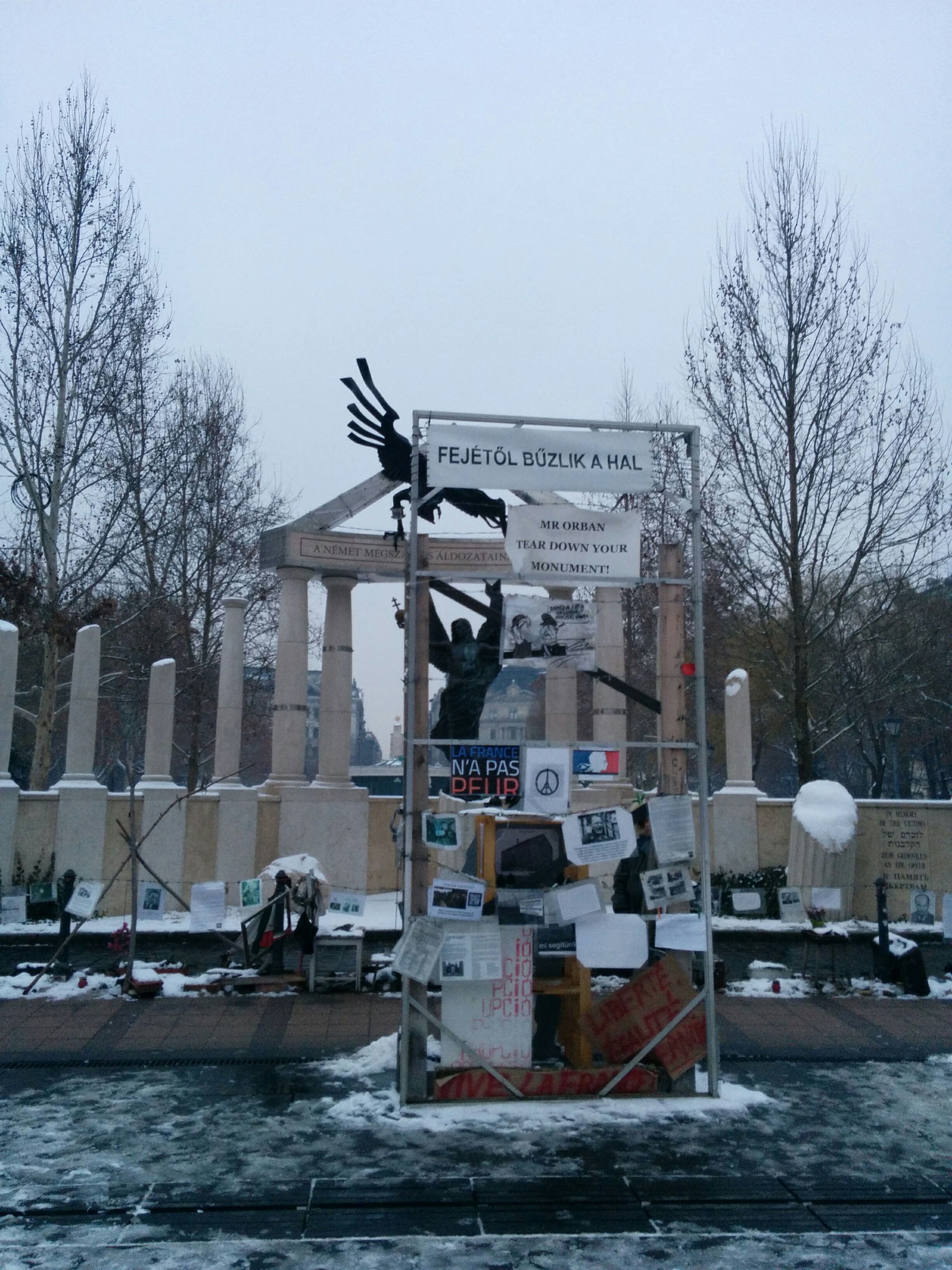 A second monument erected in front of the original in protest

To offer some context for the protests, our tour guide told us the following story:

Essentially, the protestors believe that the monument provides a false depiction of the dynamic between Germany and Hungary during World War II, and that Hungary should admit its guilt rather than fall back on German coercion as an excuse. 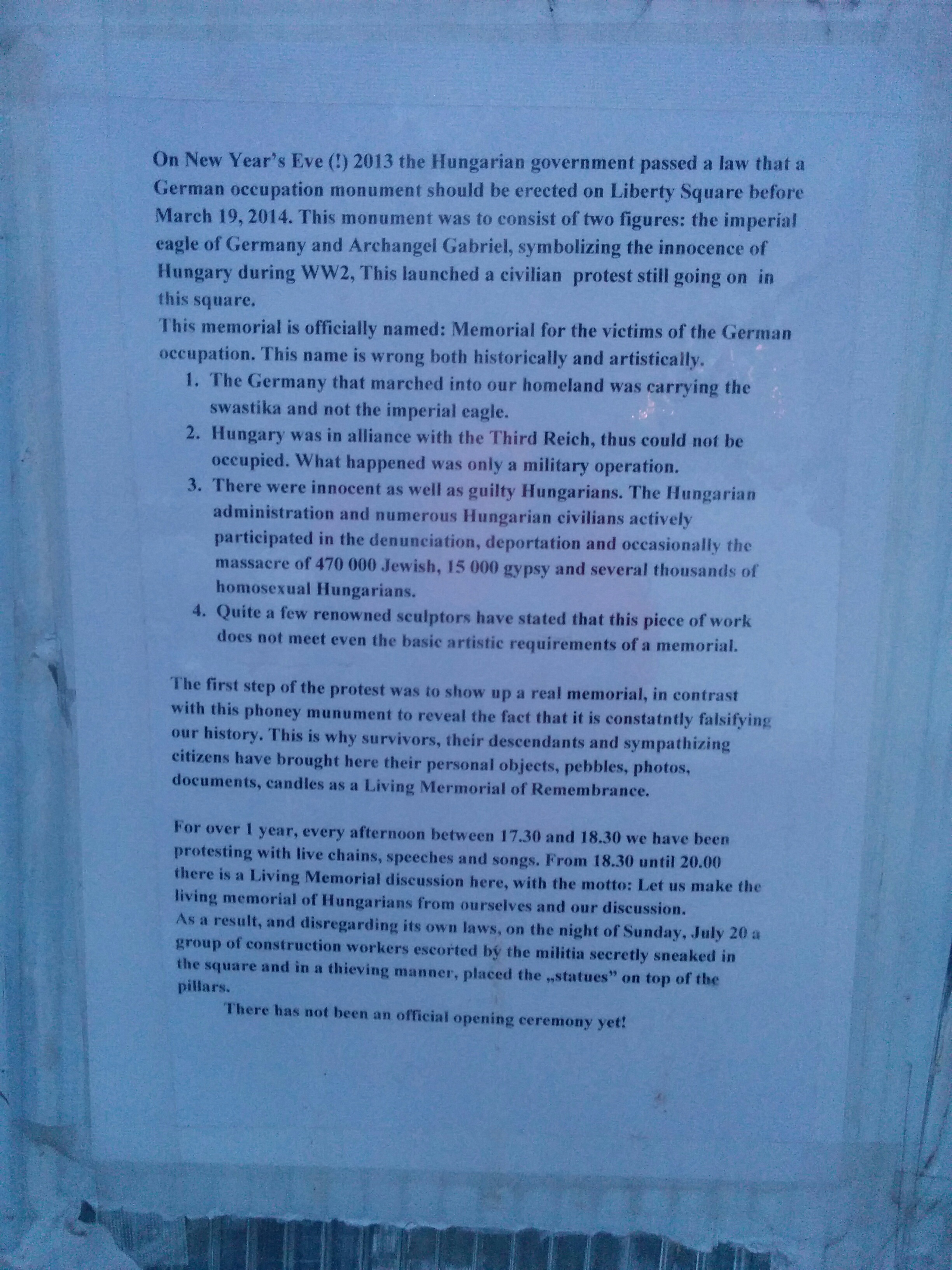 One of the signs stapled to the protest structure

One of the few remaining Communist monuments in Budapest stands in Freedom Square, commemorating the soldiers of the Red Army who died in the liberation of Hungary following World War II. It also happens to be right next to the most highly guarded building in all of Hungary, the US Embassy. On the opposite side of the monument is a statue of Ronald Reagan pointing towards the monument. Passive aggressive, much? 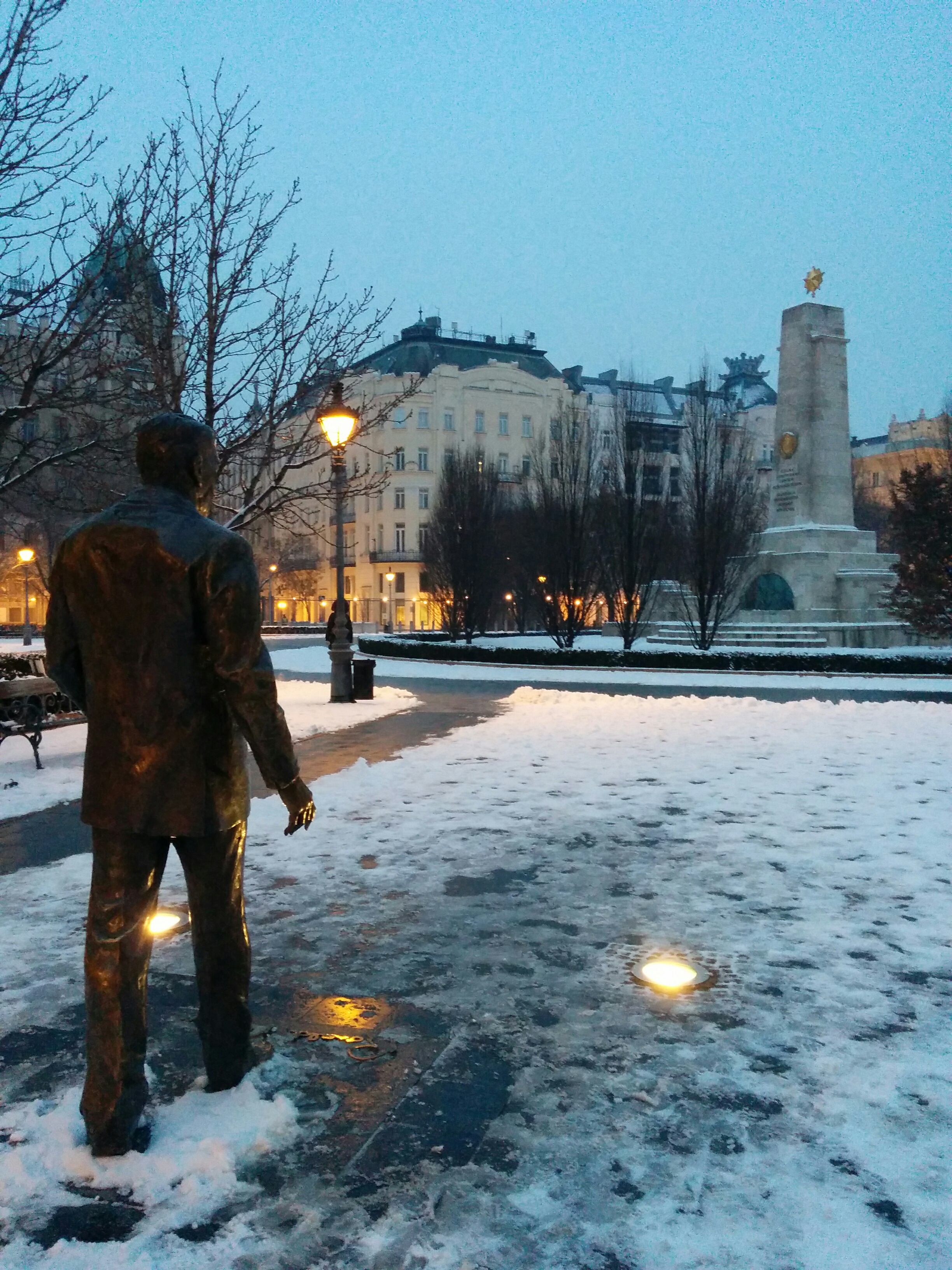 This post is already far longer than I intended any of my posts to be, so to wrap up, I can't resist including a few breathtaking shots of the city. Yesterday after class, some of my classmates and I climbed hundreds (or was it thousands?) of spiraling stairs to the top of Saint Stephen's Basilica and beheld this jaw-dropping view. 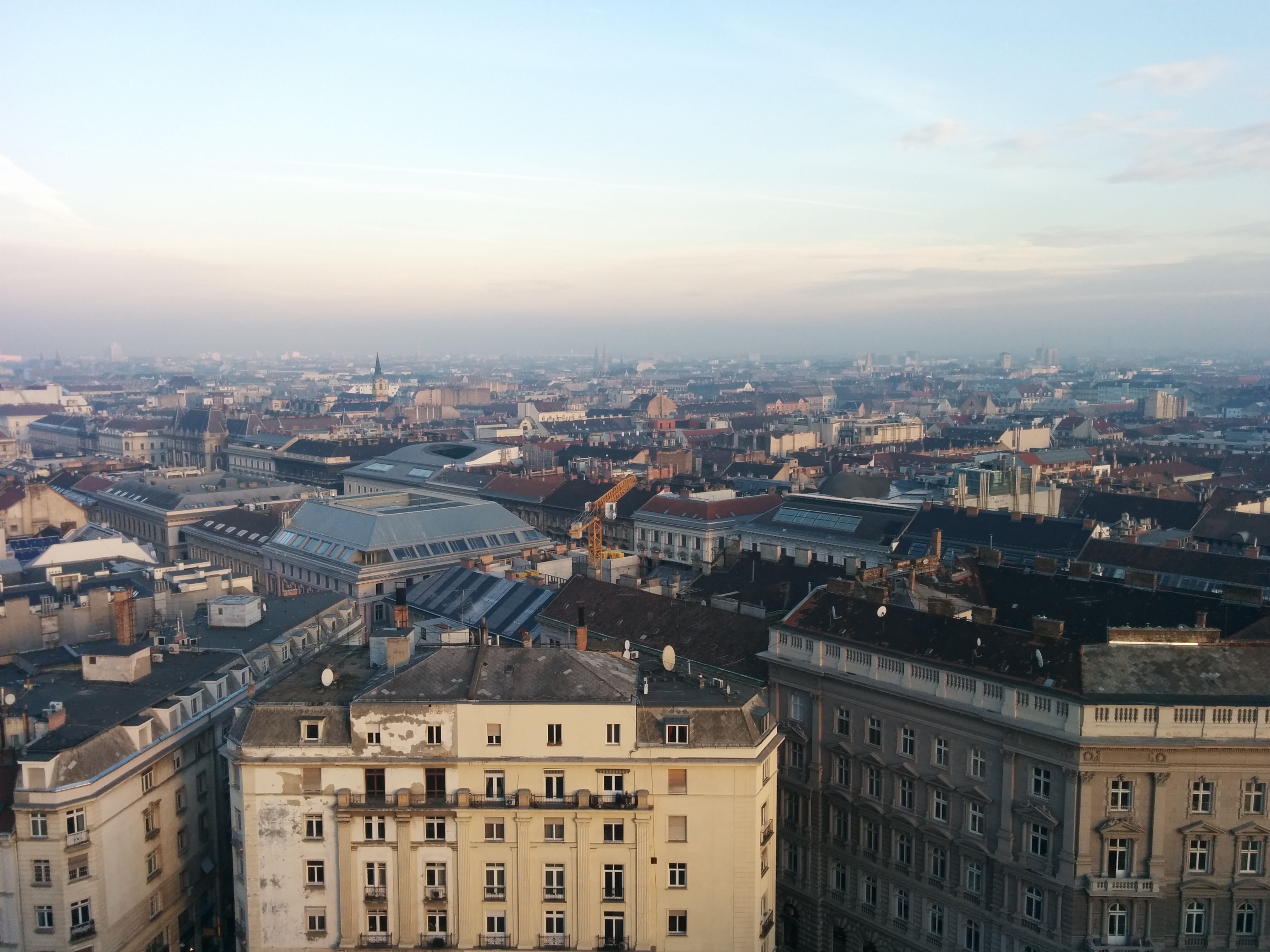 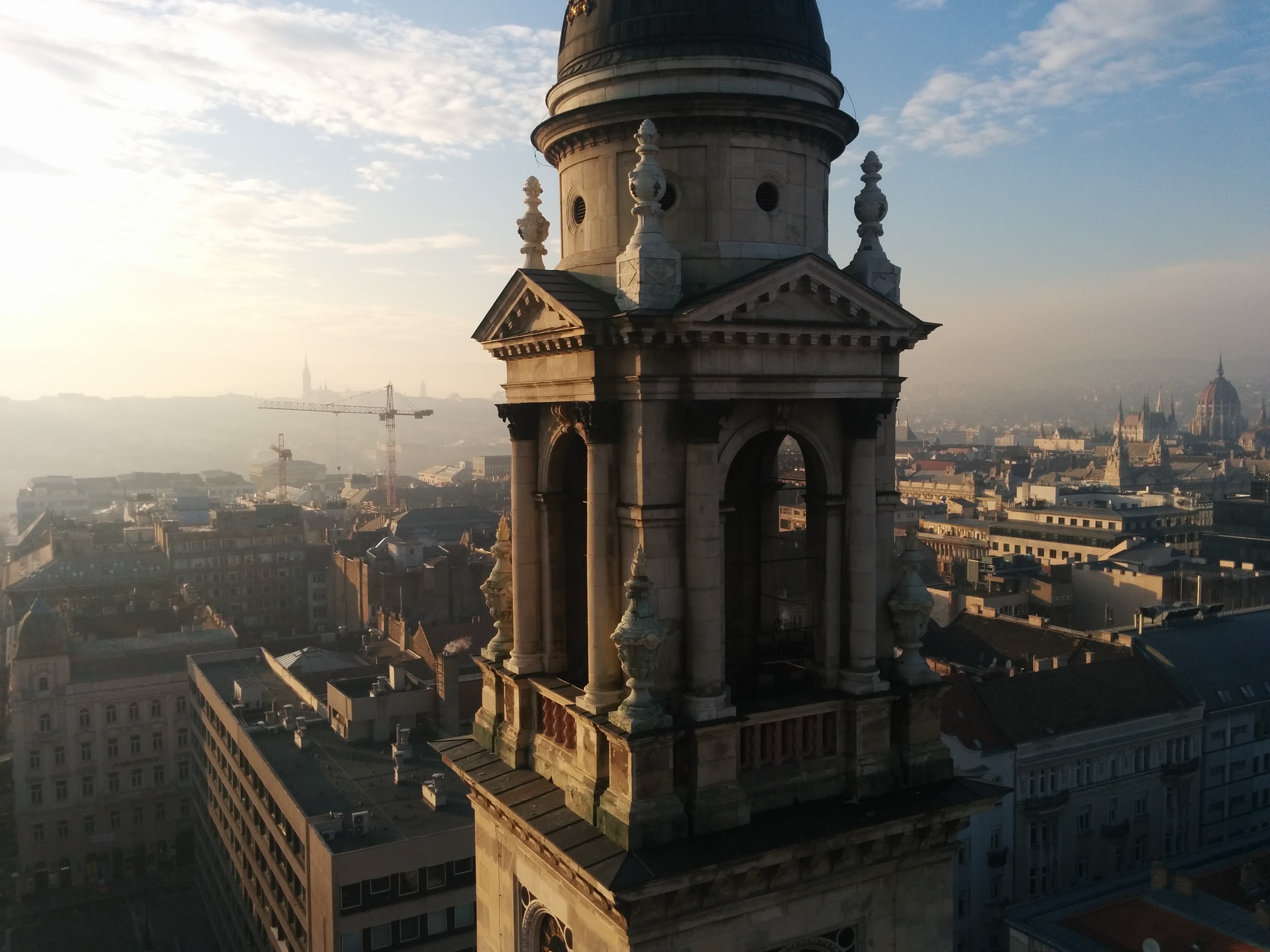 This is what I imagine the tower that the Hunchback of Notre Dame lived in looked like. 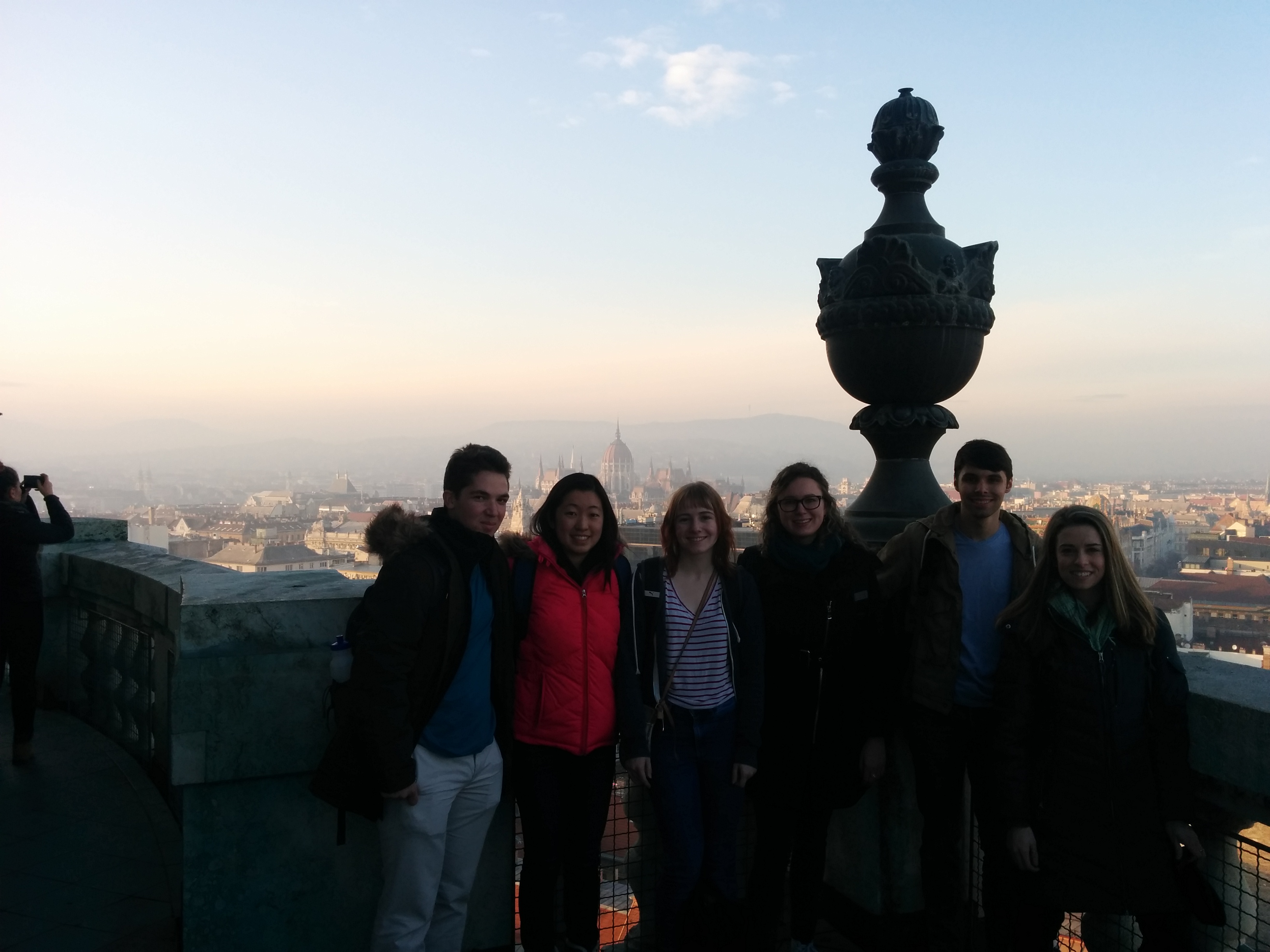